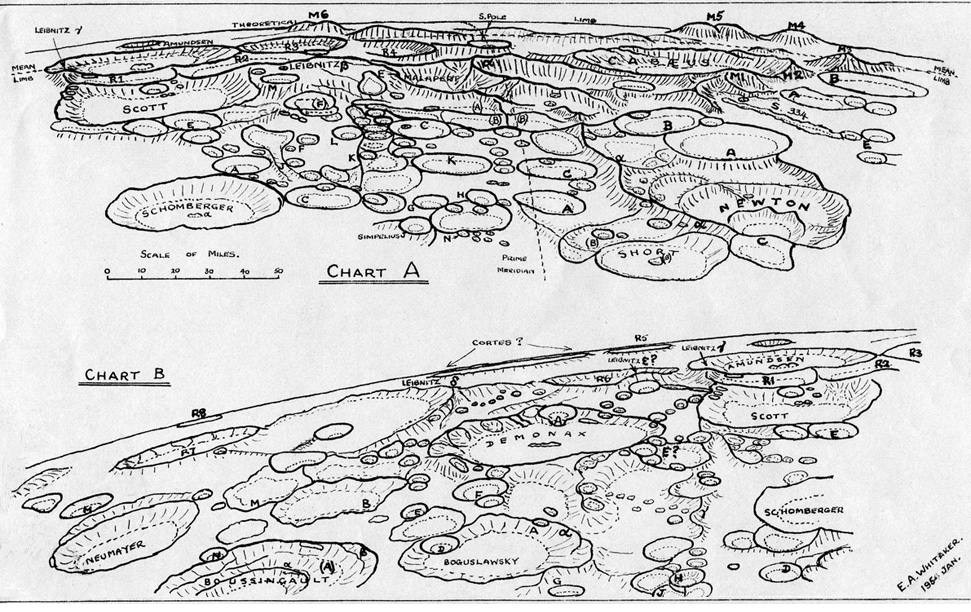 Despite a fleet of lunar probes and modern high resolution imaging, the best observer’s map of the south polar region of the Moon remains one drawn a half century ago. In the early 1950s Ewen Whitaker, then at Greenwich Observatory in England, recognized that existing maps of this polar region showed very little agreement. During a period of good librations, Ewen used the observatory’s 36″ reflector to obtain photos and direct observations to compile these polar charts. I have always admired them because they are clear and uncluttered. And his maps bear close comparison with modern images - they are quite accurate. Ewen clarified the confused nomenclature in the area and added designations for six previously unnamed tall peaks: M1 through M6. These have become better known than the traditionally labelled peaks which have Greek letter designations. The most massive peak is Leibnitz Beta on the west side of Malapert (left side of the map, inward from M6). I haven’t seen many images of this peak or in general the ones east (left on this south up chart) of the prime meridian. Do you have some?

Note: The difficult to read letter on the west of Malapert is alpha. Malapert Alpha is known today (by people who don’t know lunar cartographic history) as Malapert Peak