A Wind of Pulverized Rocks 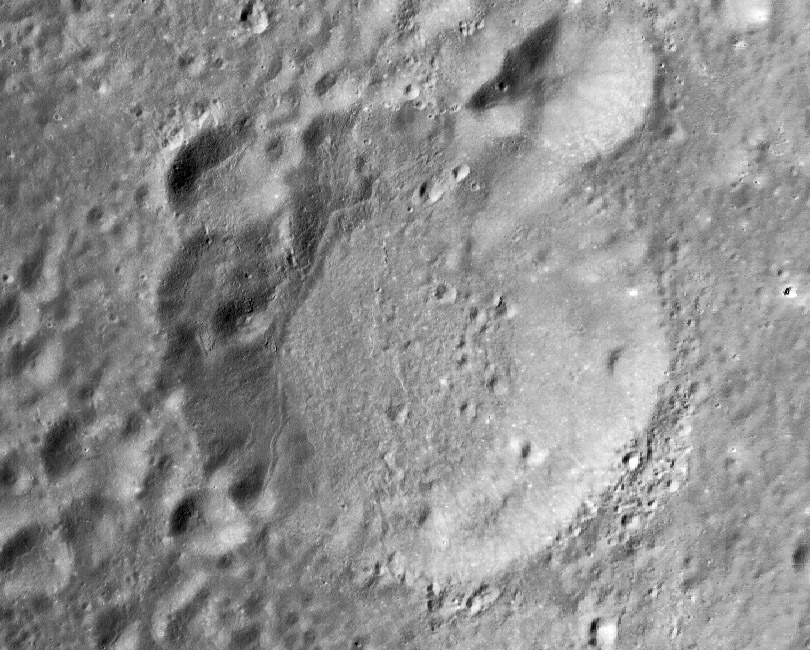 When I first noticed this crater in a WAC image Rick prepared I thought it was cut by another of the young faults that have been discovered by LRO. But a second glance said it wasn't. The crater is Wurzelbauer D, which according to our System of Lunar Craters measurements of 1965, is 38 km in diameter. It is an intermediate age crater that preserves it initial form, but downslope movement on the walls has smoothed out terraces and filled in and widened the floor, burying a central peak. What is remarkable is the ropy ridge that goes from near its rim crest in the 8 o'clock position, toward the floor at 9 o'clock, and then a little up the rim by 12 o'clock. Looking on D's floor there is another ridge or boundary, this time going about north-south, with the east (right) side of the floor having a rough surface pitted by numerous impact craters. The floor's west side is relatively smooth and free of craters. I suggest that both the rope-like ridge and the smooth floor are ejecta from Tycho. I wonder if the ridge is the edge of a broad ejecta deposit that includes the western part of the floor. It also looks like material - ejecta - streamed down the crater rim along the 4 to 6 o'clock positions, so maybe the rough eastern part of the floor is also ejecta. It will be interesting to see this feature under sunrise illumination to get a better view of small scale topography, but this high Sun perspective is enough to reveal ejecta patterns that I wasn't familiar with.