When Maria Are Bright 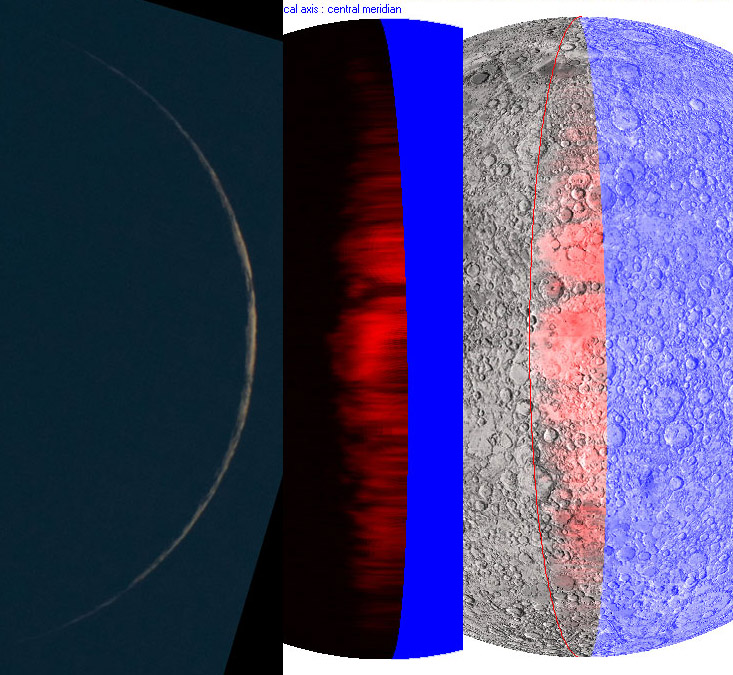 image by Jerry Lodriguss, with middle and left images prepared by Jim Mosher

On March 15, 2006, crescent (bottom image) by Jerry Lodriguss (left image above). This image was taken when the Moon was only 13.5 degrees east of the Sun, with only 1.39% of the Earth facing hemisphere illuminated. A +4.1 degree libration in longitude made the east-limb maria visible. Jim was able to calibrate Jerry’s image and display it in red as seen from above (middle image) using LTVT software. Then the red areas of the middle images were mapped onto the USGS Shaded Relief Image (from Map-A-Planet). Areas that are red in the right composite image are bright in Jerry’s original image. And the bright areas are the maria - exactly opposite to what I assumed! Jim’s explanation is that when we see a thin crescent, the Moon is being illuminated from behind the areas we see. Areas that look dark to us are hilly, with their bright sides reflecting light back toward the Sun, leaving us to see their shadows. The dark notch just above center is a dramatic example of this. The crater Neper and those beyond it are largely shadowed (from our Earthly perspective) with only a little patch of sunlight on Neper’s floor. And Mare Marginis and Mare Smythii are bright because they lack shadows and are fully in sunlight. Maria appear brighter than their surroundings when they are seen near the limb and illuminated at a low sun angle from “behind” (sun angle at limb of 0 to at least +15 degrees). As the Sun rises over a maria, at some point - certainly by 30° elevation - the surroundings become brighter than the maria and the maria assume their familiar dark tone.