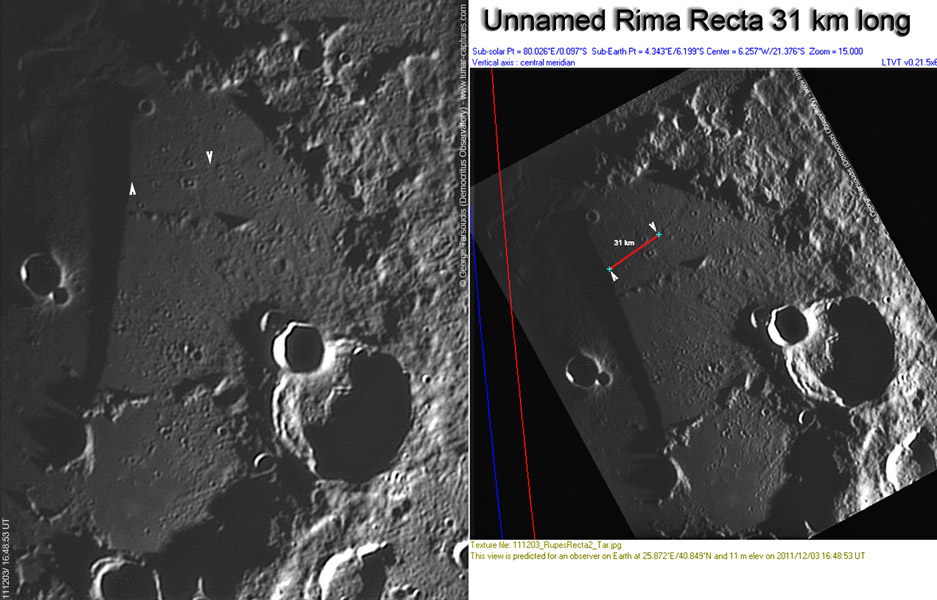 Every once in a while an observant imager discovers a faint rille. Sometimes these have been noticed before - occasionally even by visual observers of the last two centuries. This shallow trough that runs about perpendicular to the Straight Wall has been seen before but it always is unexpected. George used LTVT to determine a length of 31 km for the main segment of the rille; a broader few depressions extending to the northeast may be segments of the rille or just coincidental secondary craters from somewhere. As pointed out in one of the first LPODs this faint rille offsets the Straight Wall so it has a structural component and wasn't just a lava channel. The shallowness of the rille partly results from its roughly east-west orientation so that shadows don't emphasize it. The shallowness may also be because it was covered by a thin flow of lava, and because there is no hint of the rille on the western side of the Wall, perhaps thicker flows occurred there. Amateur low Sun images and LRO high resolution ones are revealing more shallow and narrow rilles than generally known, showing that we see only the most recent events of lunar history. Many other rilles and domes and craters are buried under mare lavas, forever lost.