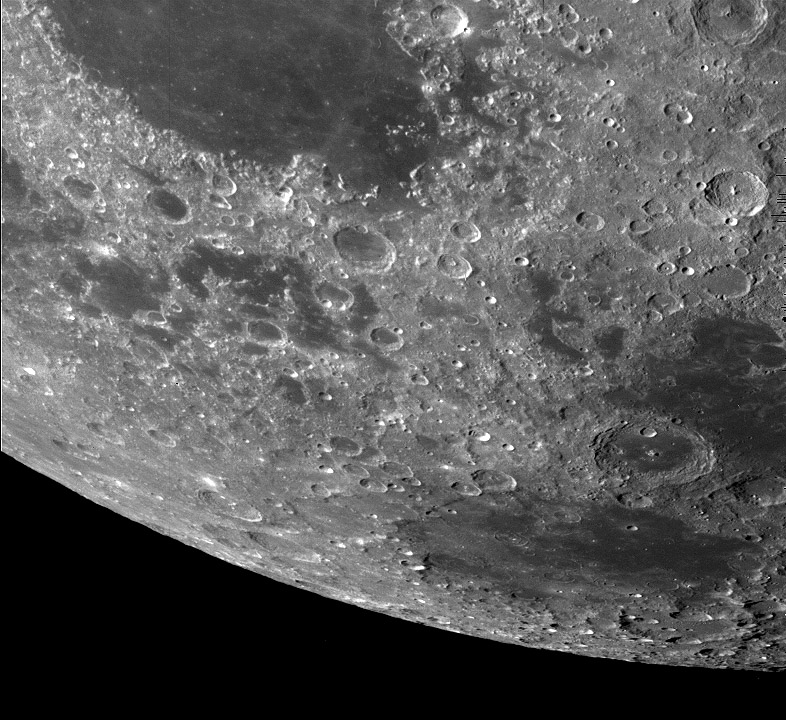 It used to be that the US could afford to build large rockets that would fly directly to their targets. But over the last few decades we have been forced to take long paths to other planets, relying on multiple passes near intervening planets to achieve our goals. A minor benefit is that we get flyby imaging along with gravitational assists; the New Horizons views of Jupiter are a recent example. When Galileo made its 6 year long odyssey to Jupiter it picked up energy from two flybys of the Earth-Moon system. Galileo was the first multi-spectral imaging of the Moon from space. The resolution was only about 1 km, but the spectral separation into different wavelength bands provided important information about the compositions of lunar materials. The Galileo multi-spectral color mosaic of the Moon is beautiful and informative. But I hadn’t seen before the individual frames that the mosaic was made from. This one provides an unusual perspective, looking south as the spacecraft flew near the equator, east of Mare Crisium (left). The weirdness of the ragged eastern end of Crisium has been hard to explain. One suggestion is that the Crisium Basin was formed by an oblique impact, somehow resulting in no distinct rim on the downrange direction. The puddles of mare lavas south of Crisium are nicely visible, mapping out the low moat between the main Crisium basin ring (at the mare boundary) and the next one out that is poorly developed on this south side of the basin, and better seen on the north. The mare-filled crater Neper bridges the circular Mare Smythii and irregular Mare Marginis. Smythii’s circular shape is evidence that it is an impact basin, but Marginis, although mapped as being a basin, is much harder to see, no matter what your perspective.