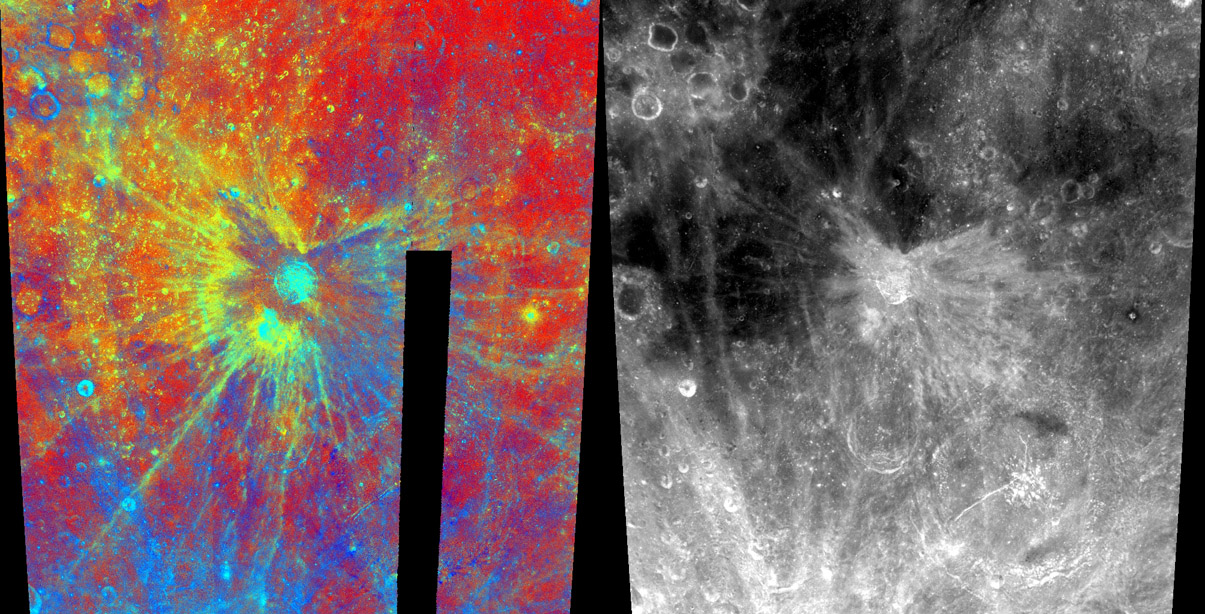 The colors of craters rays on Clementine images are like a bursting firework display preserved on the lunar surface. There was a big explosion sometime in the last billion years as a projectile crashed into the edge of Mare Fecunditatis and excavated the crater Petavius B. These two Clementine images provide details of that event. Both images show that the rays are not symmetrical around the crater - there is a ray gap, or a zone of avoidance, toward the north. This means that the projectile came in at a low angle - perhaps only 10° above the surface - from the north. In the false color image you can better see the butterfly pattern of ejecta, so called because it mostly went to the sides with just a few bright rays thrown down range to the south. The color view also graphically shows that the rays are different colors on either side of the Petavius B. Towards the west they are bright yellow, but they are blue toward the east, and superposed on both are less extensive rays (raylets?) that are a darker blue than the blue rays. What do these colors mean? Notice on the black and white image that Petavius B formed right at the contact of mare and highlands. The yellow rays are from mare rocks excavated from under the west side of the crater. Toward the east, highland rocks were dug out and thrown across the countryside as blue rays. Studies of the mechanics of impact cratering shows that the last ejecta comes from greater depth beneath the crater. Thus, it appears that Petavius B excavated beneath the shallow mare into highland rocks, accounting for the top blue raylets. Finally, note on the monochrome image the distinctive dark halo crater near the far right of the image. The color image shows that this crater brought up mare material, which must be camouflaged by a dusting of highland material. In fact, this mare material fills the Balmer Basin.

Note: Are there many oblique impact craters on the Moon? I’m not sure; there isn’t a list of them. So I started one, and invite you to add to it!