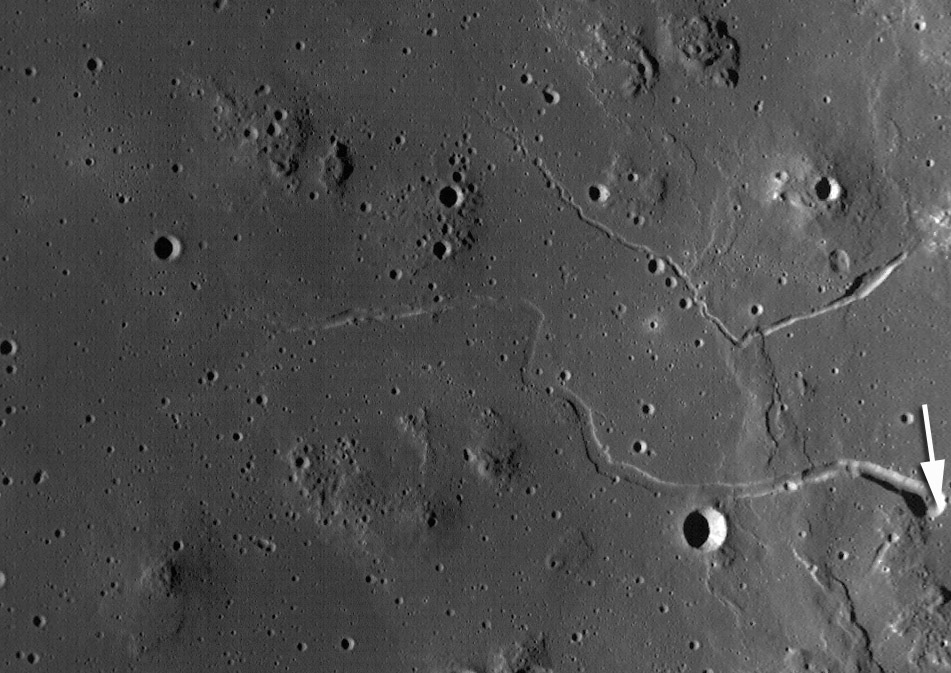 This LRO Wide Angle Camera image gives a moderately low Sun view of various volcanic features in the Marius Hills. We've seen an oblique view of the upper rille recently, and the entire region is familiar to LPOD visitors. There are at least five types of volcanic units in the Hills but only four are visible here. First are the two large rilles, with Cobra Head-like vent depressions, and progressively less deep channels to the west. These rilles probably fed recent lavas in Oceanus Procellarum. The temporal relationship of the rilles to the large mare ridge has been a subject of prior discussion. The sharply-bounded irregular low area in the ridge between the two rilles looks like a collapse that occurs when underground lava moves elsewhere. If so, that means that the mare ridge is not simply a tectonic feature but that magma had some role in its formation or modification. The fourth type of landform here is the hilly, rugged rises that are the rough cones we see with less resolution. Typically these are spectrally different than the nearby mare, have a somewhat different composition and some have pyroclastics surfaces. They are embayed by the mare and thus are older. One very small summited-pitted cone near lower center looks very much like a terrestrial cinder cone. The one type of Marius Hills landform that is not visible here is the smooth dome. Oh yes, the big arrow points to the area of a hyper resolution LRO image.

Chuck Wood
Note: These rilles do not have designations, but they should. I have recently become head of the IAU lunar nomenclature committee and we will take up the possibility of naming rilles, and maybe later domes. Amateurs have established a unique naming system for domes (Arabic numbers and nearby crater names, e.g. Hortensius 3), and rilles were last designated with a crater name and a Roman numeral (e.g. Plato II). Are these acceptable naming conventions to extend to all domes and rilles (with the few exceptions such as Kies Pi which are well established)?


Yesterday's LPOD: An Exercise for the Student