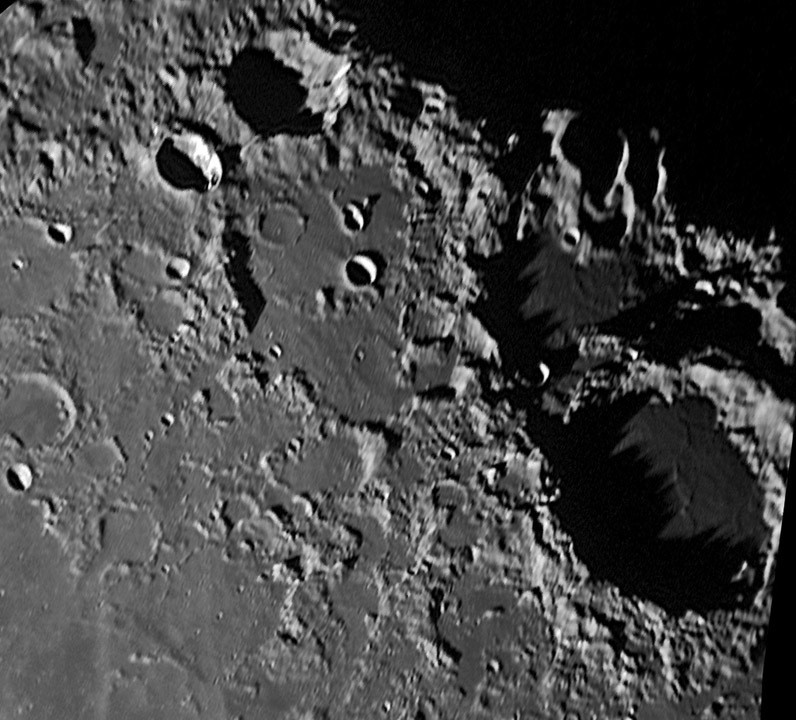 The limb regions of the Moon have always been poorly known, and even today they are less familiar than more central zones. When limb features were named in the 1800s and early 1900s some significant landforms were missed and other dubious features were given designations. In the 1960s as we compiled the System of Lunar Craters catalog and map we used the Rectified Lunar Atlas to update and correct limb nomenclature. But as Zac’s rectified image shows there is still work to do. At bottom right is Endymion a 125 km diameter crater with well-defined walls and lava-flooded floor. To the north is a region named de la Rue. Rükl calls this a disintegrated crater, but perhaps the phrase disintegrated craters would be more accurate. Zac commented that, De la Rue is probably several old craters lying superimposed, and that is what I think too. There are the remains of a large rimmed crater, open to the south, about 110 km wide. Inside it is a lower rim structure with a diameter of about 75 km, and to the south is an arc that suggests a very ill-defined crater 65 km wide. The non-rectified view of traditional Moon mappers mistakenly tied all these rim arcs into a single crater 136 km in diameter. Such a collection of defunct craters does not deserve a name. Finally, notice Thales F (the flooded crater on the left edge of the image) with two neat peaks inside its rim. What are these hills? It is unlikely they are rim slumps or misplaced central peaks, and they don’t look like steep-sided volcanic domes. Hmm.

Tomorrow's LPOD: The Moon On Earth