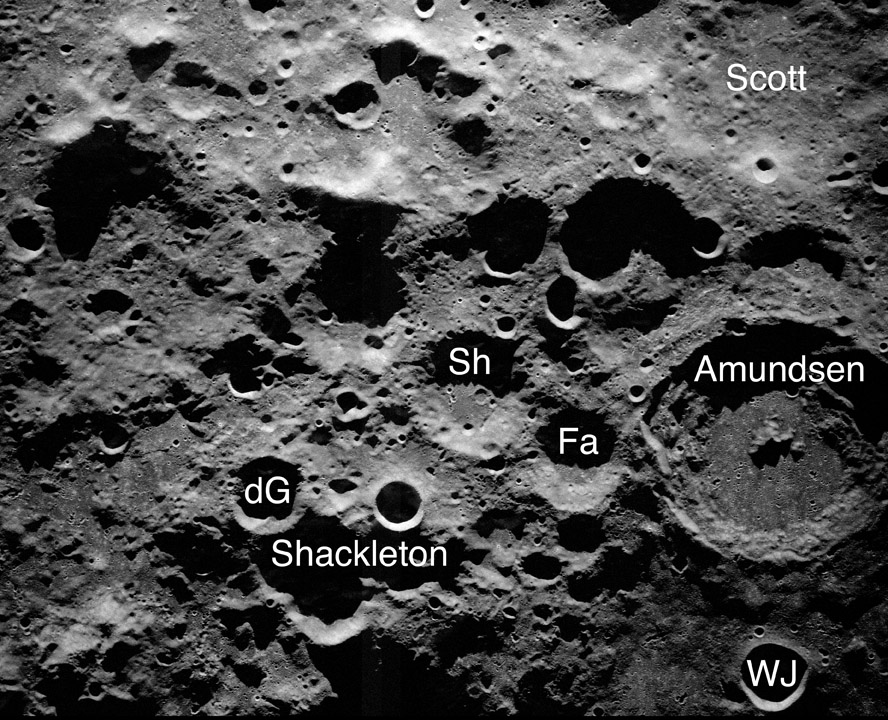 We never view the polar areas under full Moon conditions. Because the axis of the Moon’s rotation passes through its poles - that is what it means to be a pole - we always observe with grazing illumination, reaching extreme shadowing right at the poles. And that is why ice might exist there. The lack of sunlight in the bottoms of polar craters creates a cold trap for water and other possible gases released by occasional comet impacts. The prospect that such ices might exist has driven NASA’s ideas about where the first lunar base should be, with the rim of Shackleton, right at the south pole, being a contender. In order to better understand the topography of the poles and to search for evidence of water Don Campbell (Cornell University), Bruce Campbell (Smithsonian Institution) and their colleagues have used the Arecibo radio telescope in Puerto Rico and the Byrd radio telescope in West Virginia to create the highest resolution lunar image ever obtained. Individual images achieve 20 m resolution but today’s LPOD is a 100 m version that shows a larger and more interesting area - and the resolution doesn’t look much worse. This region seems to be a normal highland area with many generations of craters. The most interesting features are the massive mountains near the top of the frame, which are thought to be parts of the rim of the 2500 km wide South Pole - Aitken impact basin. The most prominent mountain is right on the 0° longitude meridian at about 86°S. This is the famous Mt. Malapert, often mentioned as a peak that could be covered in solar cells to provide continuous power to a polar base. Bruce says that they have also collected very high resolution data for Aristarchus, Reiner Gamma and the Smart-1 crash site.

Technical Details:
Image constructed by transmitting a 12.6 cm radio pulse to the Moon from the Arecibo Observatory and measuring its reflection with the Byrd telescope at Greenbank Observatory.

Related Links:
Rükl plate 73
The 20 m image and other data