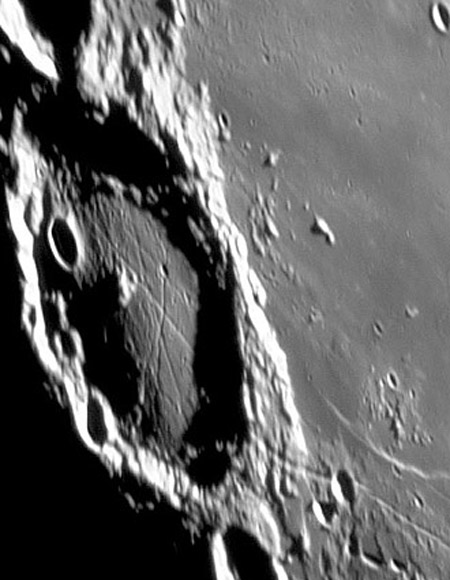 Bruno Daversin has done it again! This recent image of Hevelius is the finest ever taken from the surface of the Earth! Ignomiously stuck near his lunar rivals Riccioli and Grimaldi - they ignored all the names he had given to craters - Hevelius is an 106 km wide crater that once probably looked like Copernicus. But its terraces have lost their sharpness and only one off-center peak sticks up a kilometer. Hevelius' depth of about 2.1 km suggests that it has been filled in by some material by about 1.5 km. The surface of the floor is relatively smooth, but not dark, so if mare lavas originally flooded Hevelius they have since been veneered with lighter material. Alternatively, Hevelius' fill may have come airmail as ejecta from the formation of the Orientale Basin. The shadowing on the floor south of the peak shows that the floor is slightly domed upward. The fascinating feature about Hevelius is its system of linear rilles. Sometimes an X pattern can be glimpsed but this marvelous image shows that the rille pattern is more complex. The higher Sun Orbiter image shows that the rille at the bottom right of Bruno's image cuts the rim and is continuous with a rille on the crater floor. Two other interesting features occur on the mare SE of Hevelius. A small fault catches the Sun and appears as a white curved line. And a little north of the fault is a rhombus-shaped mound that might be a dome. This is an area that's worth looking at carefully!

Chuck Wood
This is a classic LPOD first published six years ago on May 6, 2004.