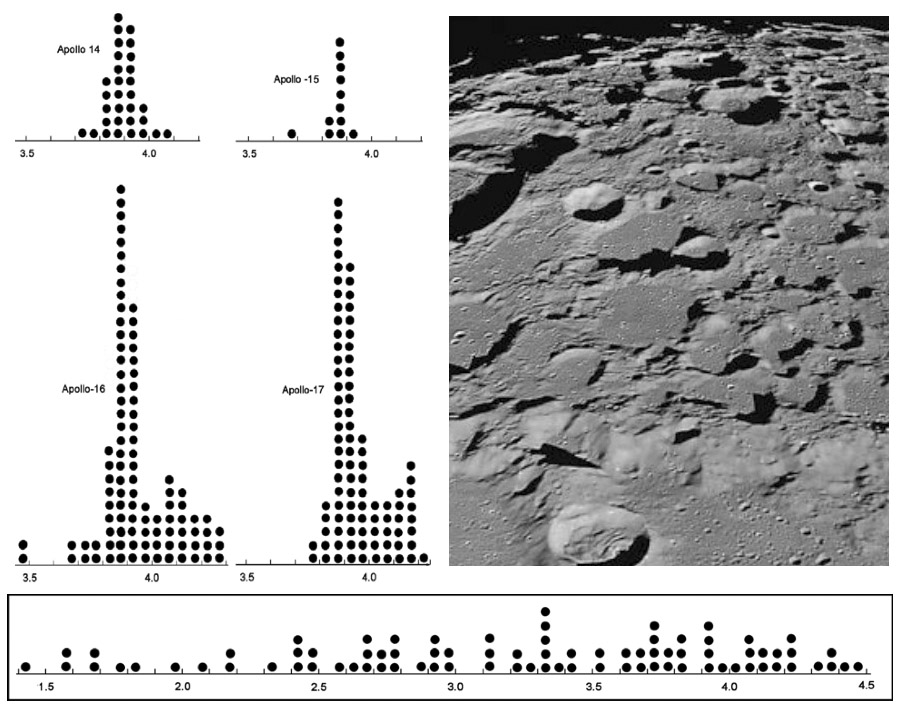 The Moon formed 4.5 billion years ago during a short period of intense accretionary impact cratering. High rates of cratering tapered off over the next half billion years, and then more slowly, being about constant over the last 3 b.y. A major controversy over the last 25 years has been if that is the complete story or if there was an intense but brief period of cataclysmic cratering about 3.9 b.y. ago during which most of the basins and large craters formed. This idea developed from radiometric dating of impact melt and other shocked Apollo samples whose ages clustered around 3.9 b.y. Most lunar scientists seem to accept this late heavy bombardment (LHB) proposal, but abstracts for an upcoming meeting show that other influential researchers are questioning it. Gerhard Neukum and colleagues have looked at the distribution of ages of shocked Apollo samples and lunar meteorites – pieces of the Moon that were ejected by impacts and travelled to Earth. They see the clustering of ages near 3.9 b.y. but also evidence for earlier shock-forming impacts. The Apollo 14 and 15 samples have a strong peak at 3.9, and those missions sampled Imbrium ejecta. Apollo 16 and 17 were further from Imbrium but those shocked rocks have ages at 3.9 but also record other big events at 4.1 and 4.2 b.y. The lunar meteorites – which sample more widely than Apollo missions – have no peak at 3.9 but show that large shocking events – large crater formation – happened widely before and after that time. This abstract and others from the upcoming conference support the idea that all of the Apollo landing sites and samples were heavily contaminated by ejecta from the Imbrium impact, accounting for the pervasive 3.9 b.y. peak. Perhaps there was no LHB. We need samples far from Imbrium to tell – the backside would be fine.


Yesterday's LPOD: Sucking Up the Sea

Tomorrow's LPOD: Sorting Out the Rays