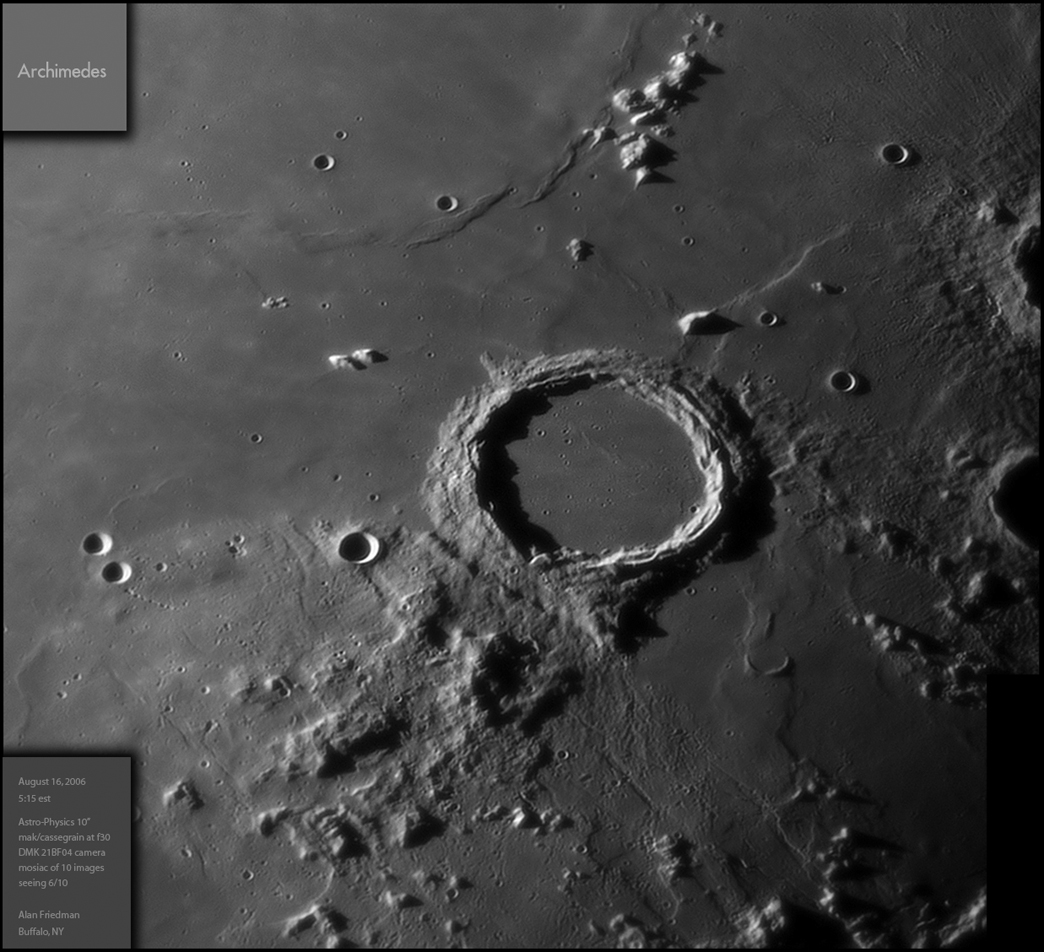 This wonderful image documents so many aspects of lunar history that it deserves a chapter rather than 200 words. The oldest feature visible is the Spitzbergen Mountains, the tops apparently of an inner ring of the Imbrium impact basin. That peak ring formed when the basin was created about 3.85 b.y. ago. Because the adjacent mare ridge also defines a circle marking the mostly buried inner ring it also is related to the formation of the basin, but is manifest in younger mare lavas. The Apennine Bench area (hilly terrains cut by linear rilles near Archimedes) is the next oldest unit; in fact, rocks of this material collected by Apollo 15 astronauts have the same age as Imbrium. This material is volcanic and erupted on the floor of the newly formed basin. The Archimedes Mountains and some of the isolated peaks near the bottom right of the image are probably masses that slid down the Apennines (Imbrium’s rim) like giant terraces, so they also are the age of the basin. Next the crater Archimedes was formed on top of the Apennine Bench, and later mare lavas filled the deeper parts of the Imbrium basin, burying most of the inner rings and surrounding Archimedes. Fractures under Archimedes allowed mare lavas to rise up and flood that crater’s floor. The little crater Spurr had a similar story, partially. It formed on an earlier surface of mare lavas but then more recent ones surrounded it and destoryed or overwhelmed its rim so it is now just a horseshoe-shaped ridge. Mare lavas sampled by Apollo 15 astronauts are dated to 3.30 b.y. so Archimedes and Spurr have ages somewhere between 3.85 and 3.30 b.y. The youngest significant geologic event is indicated by the low ridges and secondary crater chains from Aristillus (off the image at upper right) which are clearly superposed on top of the mare. Based on an Apollo 15 sample that was reheated by a strong shock event dated at 1.29 b.y., that is the likely age of Aristillus. Well, that’s way more than 200 words!

Yesterday's LPOD: The Bottom of the World, Upside Down