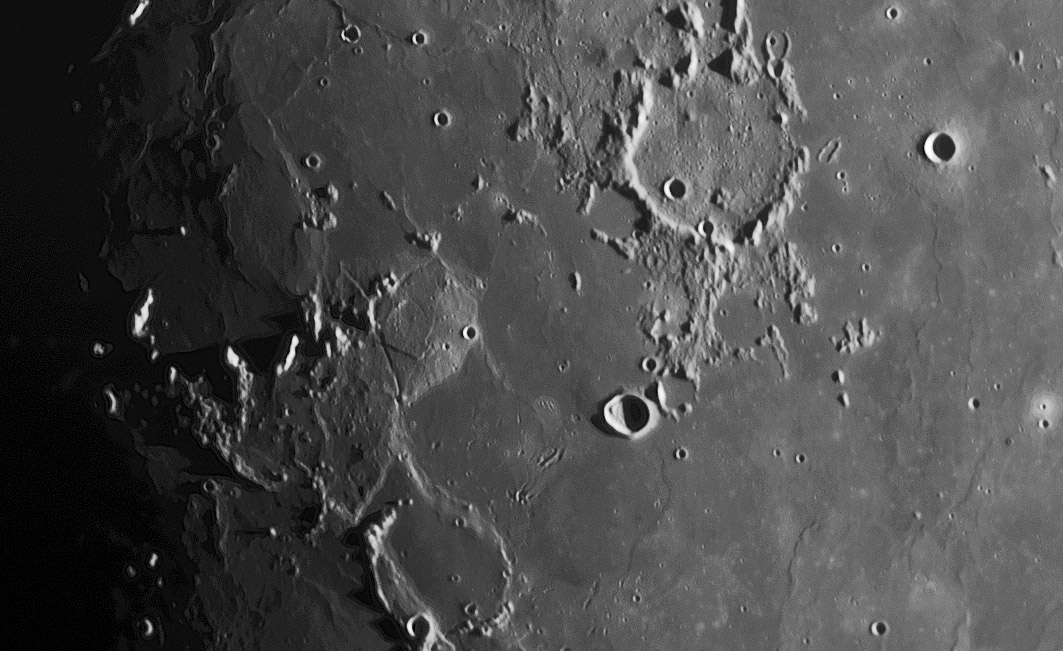 This is an image of oddities. Other than the small simple craters, most of the craters here have been strongly modified, and the mare also is not completely standard. Opelt, near bottom left is a ruined crater, with a continuous arcuate ridge on the left facing a similarly curved, but lower, mare ridge on the right. Presumably this was once a perfectly normal complex crater filled in by mare lavas. The most mountainous pieces of the remaining rim are at upper left and bottom right of the crater and they appear to be sliced through, as if by basin ejecta that flowed - and abraded - past them. Except they are not radial to Imbrium (as I first expected); perhaps they were scoured by ejecta from the Nubium Basin - but that seems too old. So the sequence here is crater formation, rim abrasion, lava flooding, and then after lava solidifies, the formation of the broad mare ridge on Opelt's left. Immediately above Opelt is a less certain, or more ruined, crater of about the same size. Its left side is defined by the edge of a high-standing piece of older material cut by two or three groups of rilles. This is probably a local thick spot of Imbrium ejecta that wasn't later covered by Nubium's lavas. Like other parts of the basin's ejecta (see above center) it was cut by rilles, I suppose the ejecta was an unconsolidated rock and was easy to deform, but I wonder what forces let to the rilles formation? To the right of Opelt and the putative ruin above it is another even less certain ghost crater hinted at by a curve of darker mare on its left side and a very low mare ridge on the right. An odd slightly fuzzy looking curved line crosses the right half of this possible feature. At first I though it was a defect - an out of focus piece of hair - but then I saw it on other images. It is a delicate shadow cast by a low mare ridge - an unusual occurrence.


Yesterday's LPOD: Not Quite the Moon