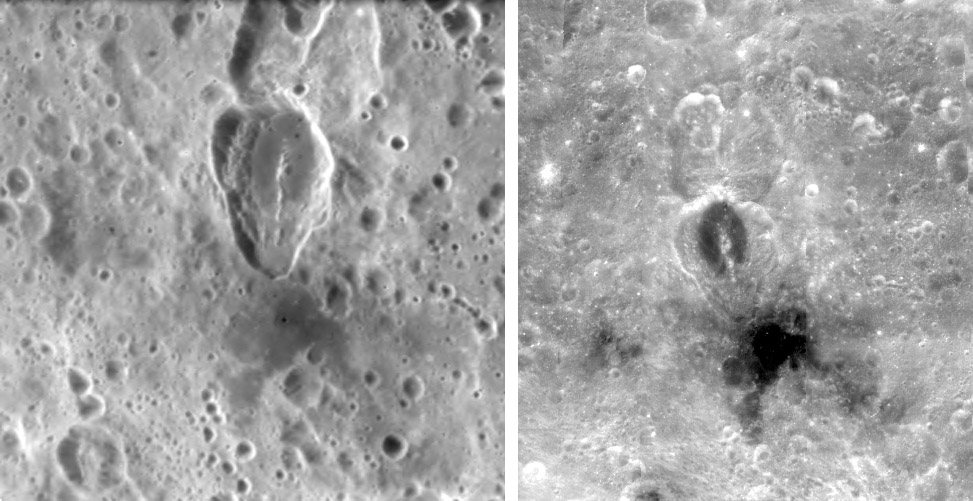 At the end of the SMART-1 mission a number of images were released that had been taken during the previous few orbits. One from the farside immediately caught my eye. It shows the classic morphology of an oblique impact. Buys-Ballot is an elongated crater with a pear-shape, 90 km long by 60 km wide, and has a central ridge. The smaller south end of the feature almost looks like a pre-existing crater that has been superposed by the bigger feature, but this is exactly the same as at the more famous oblique impact, Messier A. Both the SMART-1 (left) and Clementine (right) images show dark mare material within Buys-Ballot and to the south of it. These lavas are distant from most other mare lavas on the farside, which are far south within the South Pole-Aitken Basin (but its not not too far from Mare Moscovience). And a pond of mare is not surprising because Buys-Ballot is inside an ancient but still deep (3.6 km) depression called the Freundlich-Sharanov Basin. But Pete Shultz, Carolyn van der Bogert and Carlé Pieters (all at Brown University) proposed that the dark material is not normal maria but resulted from the energy of the oblique impact that formed Buys-Ballot. They estimate that the crater was formed by a 10 km wide projectile striking the Moon at just 10° above the horizontal. The very low angle created intense friction between the lunar surface and the hypervelocity projectile, melting both. Schultz and colleagues suggest that frictional melting created the dark material inside the crater and downrange (to the south). Finally, the morphology of Buys-Ballot strengthens the interpretation of an oblique imapct origin for Schiller and perhaps even Heraclitus. Finally, notice the odd shaped crater north of Buys-Ballot. In the Clementine image it doesn’t seem odd (other than the 3-leaf clover crater sitting on it), but in the new SMART-1 scene it seems to have a ridge. Is it somehow related to the oblique impact that made Buys-Ballot?

Technical Details:
27 August 2006. Img 19 from Advanced Moon micro-Imager Experiment (AMIE) camera on SMART-1 spacecraft. I have partially rectified the SMART-1 image to make it easier to compare with the Clementine one. Off-topic: Do you see the two concentric craters in the long mosaic of the western part of the Moon.

Yesterday's LPOD: An Early Woman Observer of the Moon

Tomorrow's LPOD: A Quarter of the Farside