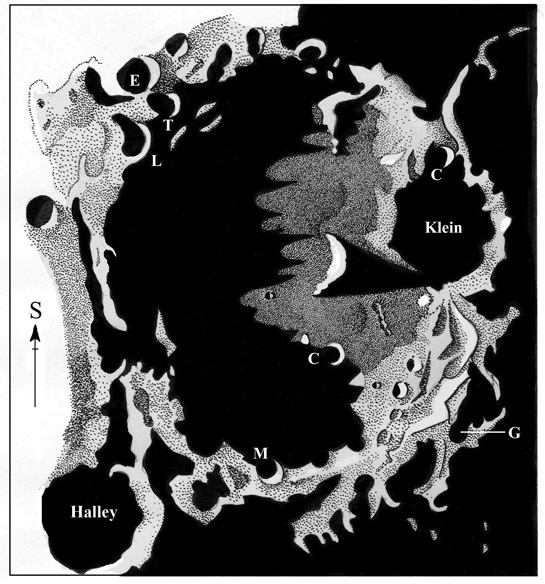 south up drawing by Philip Morgan

Did you know that at sunrise Albategnius has more spires of shadow cutting across its floor than any other lunar crater on the nearside? In fact, I don’t really know if that statement is correct since I have never really tried counting them all, but I would think that Albategnius would be one of the top contenders! On this occasion I counted 16 or more, including the spire cast from the great central peak. This large number of shadow spires is due to the plethora of lesser craters that encircle the ramparts of this vast crater, including Albategnius L high on the east rampart, which is a small banded crater. The central peak of Albategnius is slightly off-centre to the west, and is so large that it almost looks like the up-tilted remnants of a once grand crater that has sunk, leaving just a section of its western rampart sticking out. Recent measurements by John Moore give the height of this peak as 1,735 m above the floor. On the very summit sits a small craterlet about 1.6 km in diameter. This is a fine test for the visual observer, requiring steady seeing and the correct lighting for you to be able to pick it out. To the west of the central peak is the crater Klein with a diameter of 44km, with the prominent small crater Klein C on its southern cusp. Just to the northwest of the central peak on the floor I noted a short and somewhat denuded crater-chain together with some low mounds. Due north of Klein on the northern outer flanks of Albategnius is the small crater Albategnius G. This was named Alter by Wilkins and Moore, but the IAU didn’t accept the name for that crater, instead giving it to a far side crater.

Philip Morgan
Note: John Moore has made a synthetic image from digital terrain data to compare with this drawing.