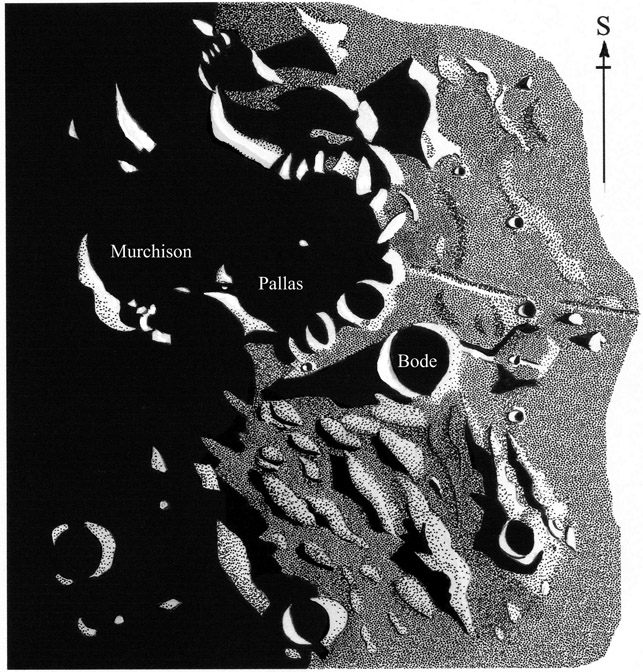 At the onset of observing the trio Murchison, Pallas and Bode under very late afternoon lighting, the small central peak of Pallas was seen as just a bright star-like point of light, so I decided to try to determine the actual timing of extinction, and as near as I could ascertain this occurred at precisely 05:04 UT. Murchison, (Pre-Nectarian) is overlapped by the younger crater Pallas (Nectarian). Despite its younger age Pallas appears to have almost faired worse as far as degradation is concerned. The remaining south, north and west outer ramparts have been sliced into individual segments. Observing the region many year’s ago under similar lighting conditions I thought that these segments resembled a set of sharp teeth, and so just for my own interest nicknamed Pallas the Shark’s Teeth crater! Situated just to the north of Pallas is the 19 kilometer wide Bode. Running from the outer west rampart is a rille that cuts a flat-topped mound, with another much longer one to the south, both easily seen on this occasion.

Philip Morgan
Note: Jim Mosher conducted a topographic simulation of when the Pallas peak should last be illuminated and came up with a time of 5:16 UT. But the LRO digital map misses a strip of laser data at the critical point so the time could be earlier if a taller than average peak occurs there.

Tomorrow's LPOD: A Basinful of Features