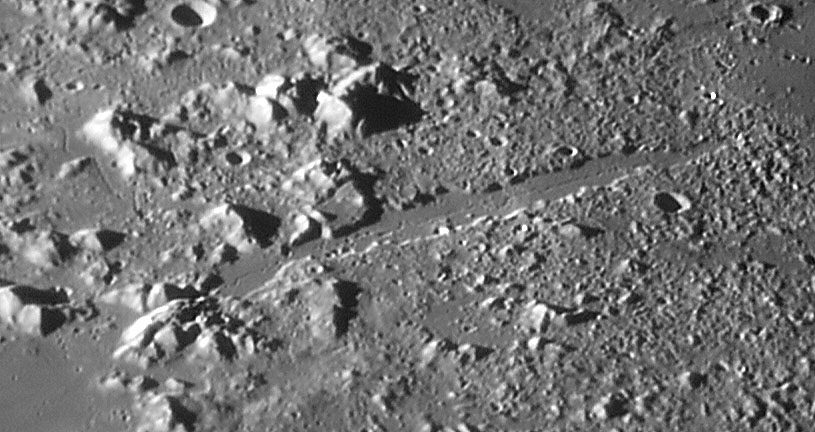 How many times can LPOD publish Stephen Keene’s wonderful image of the Alpine Valley? It was originally published Dec. 14, 2004, and then used again with a different text on June 9, 2005 and repeated on February 5, 2006! And now it serves to illustrate the interesting observational history of the Valley and the tiny rille within it that is featured in the August, 2006 issue of The Lunar Observer. TLO is the publication of the Lunar Section of the Association of Lunar & Planetary Observers and normally contains images and drawings by its members, but this issue includes two fascinating historical articles. Nigel Longshaw writes about observations of the Alpine Valley with special emphasis on Schroeter’s discoveries, and Mardi Clark rehabilitates the reputation of William Pickering, who 100 years ago was actively observing the Moon. The Alpine Valley story told by Nigel and Mardi’s Pickering tale cross, for in 1891 Pickering discovered the narrow rille along the center of the Valley. But Schroeter, observing in 1796 and later, detected such a fine object within the Valley, and in one of his drawings actually included a dashed line on the Valley floor. Nigel suggests that Schroeter observed the rille but was uncertain of its true nature. The rille is very elusive, and remains today, as Pickering wrote, a pretty test for definition.