Early News About a Remarkable Object 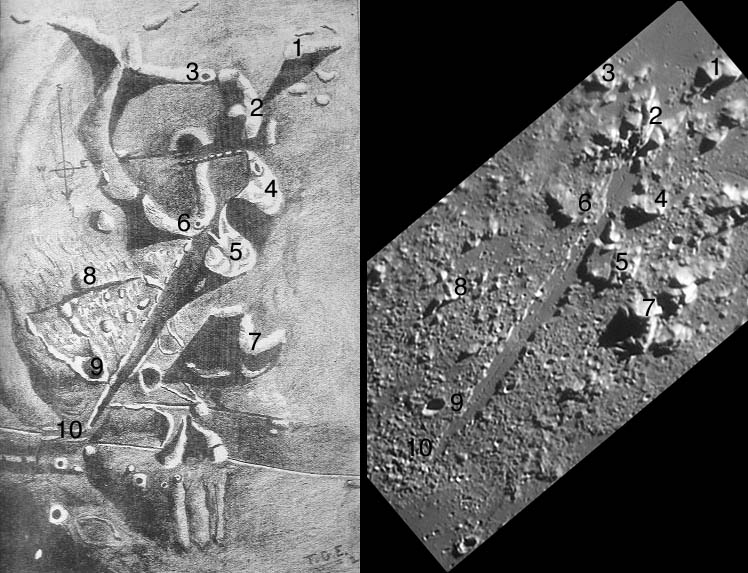 image by T. Glyn Elger (left) and Stephen Keene (right) This LPOD was originally published June 9, 2005. See below for the story of 9 lost LPODs.

In the 1960s and 1970s when many new scientists became involved in analyzing Apollo images and samples, I discovered that few of them knew anything about previous studies of the Moon. They would publish discoveries that they ignorantly thought were new, but originally had been made by observers 100 to 10 years earlier. We need to pay attention to the work of our predecessors, honoring that which was a prescient, and respecting the effort where they were wrong, but reasonable. Jim Phillips, a devoted student of lunar history, has recently acquired some journals from the 1890s that remind us of the good works of our lunar ancestors. Here, from Jim’s collection, is a drawing of the Alpine Valley made by Thomas Glyn Elger in 1892 using a 8.5" Calver reflector. For comparison, on the right is an image by one of this century’s best amateur imagers, Stephen Keene. I have shifted the modern image to the same orientation and scale as the old one. At first glance Elger’s drawing is very exotic, looking modernistic (for the 1890s!) and abstract, but a detailed comparison with Stephen’s image shows remarkable agreement. The large blocks (really mountains) labeled 1 to 7 are in nearly the same positions in the drawing and the image, and the shapes of the mountains in the drawing are abstractions of the complexities seen in the image. Numbers 8 and 10 are linears that Elger interpreted (our eyes are so good at finding patterns!) from vague alignments of hills and shadows. But the drawing is not perfect; the large crater numbered 9 is real, but Elger shows another one across the Valley which does not exist. Or it does, but is much smaller than depicted. In general, the drawing captures an essence of the Alpine Valley, but overlooks or misinterprets the small details. And since classic observers were obsessed with finding changes on the Moon, their best work, like this drawing, were inadequate for the task. Like an abstract painting, Elger captured the spirit of this piece of the Moon, but missed the grittiness of its reality.

Yesterday's LPOD: On Approach for Landing

Tomorrow's LPOD: The Most Magnificent Crater?

LOST LPODs: The last LPOD of the original series was published May 31, 2005. On the next day I had difficulty with the server and couldn’t get any more LPODs to display. After some days of frustration, Anthony Ayiomamitis (the co-founder of LPOD) let me put 9 new LPODs on his site. However, few people knew about the temporary URL and those 9 LPODs were not widely seen. Even I forgot about them! Here is one of them - I will restore the others from time to time over the next few months.