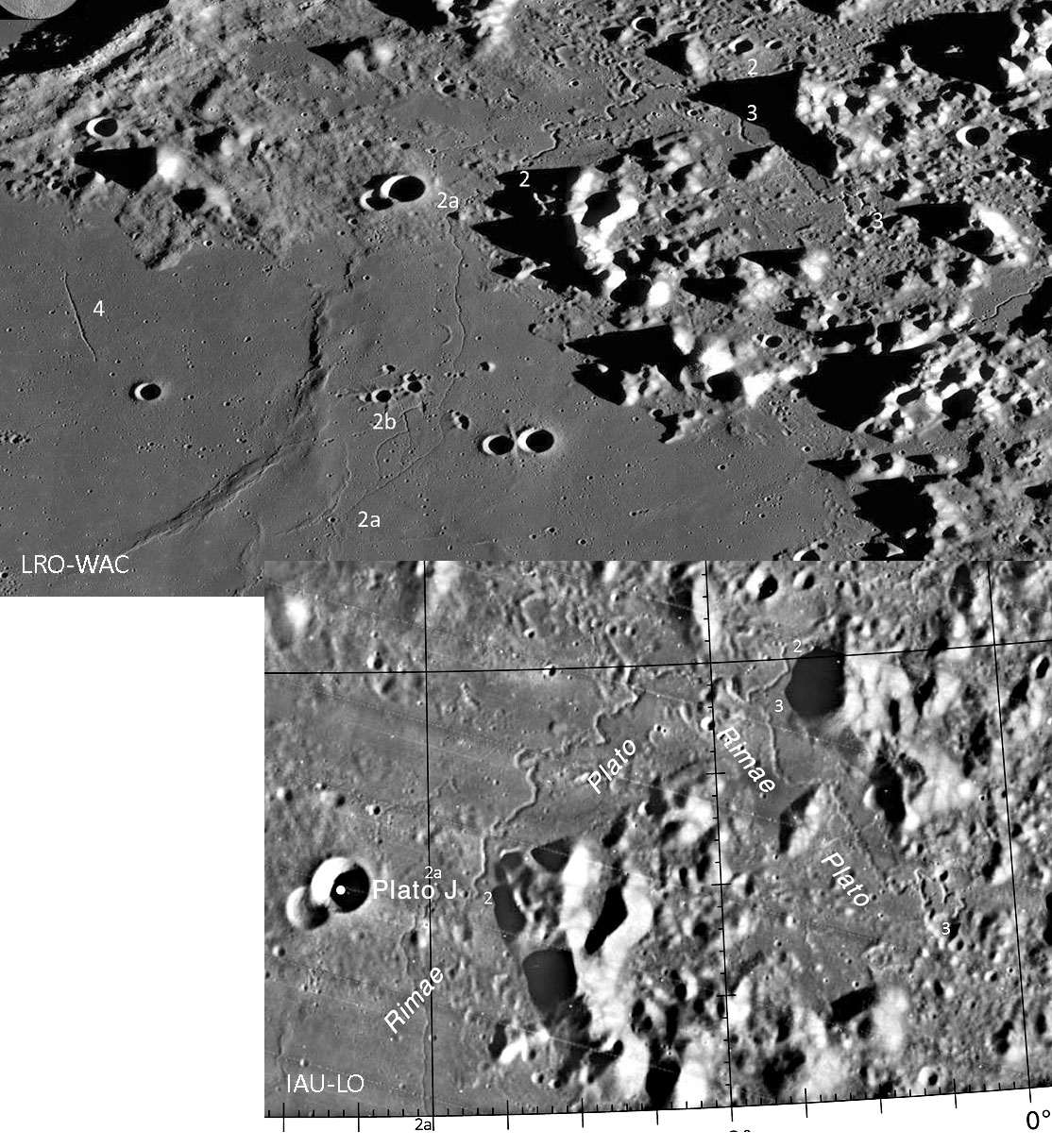 top image from LRO-WAC nearside mosaic and bottom image from 1:1 Million Maps of the Moon

The IAU approval of the System of Lunar Craters (SLC) in 1967 included not just crater names and letters but also designations for other types of features including rilles and elevations such as mountains, hills and domes. But no modern catalog of rilles and elevations exists, and the official IAU nomenclature as memorialized on the IAU Gazetteer of Planetary website does not include them. But now the IAU lunar nomenclature group is investigating the possibility of reinstating nomenclature for the discarded features, starting with rilles. Part of the reason for this reconsideration is the issuance of Lunar Reconnaissance Orbiter - Wide Angle Camera mosaics that provide high resolution image maps for resolving previous uncertainties.

Or so I assumed.

As a test of the feasibility of restoring designations for rilles I looked at the ones named for Plato. The SLC had two, the area shown above includes one, Rima Plato II - rilles were designated with Roman numerals. The IAU referred to both of Plato's rilles with the less precise Rimae Plato designation that simply said there were at least two rilles named after Plato. The lower image is an excerpt from the LAC 12 sheet of the IAU 1:1 Million Nomenclature Maps of the Moon showing the name Rimae Plato along two rilles. In SLC these were both called Plato II. The LRO-WAC mosaic (top image) suggests they may be just one rille because the area where they meet is hidden by shadow (upper right between the 2 and 3). But LAC 12 (compiled from Lunar Orbiter IV images) shows that in fact these two rille segments do not meet - they are two separate rilles. I have labelled one with a 3 at each end - the bottom right end has an elongated rimmless depression that is the source of that rille. The other rille has a 2 at each end but it is not clear which was the source. Once again, a long shadow on the LRO mosaic covers the end. One thing that is clearly depicted on the LRO mosaic is a very thin rille that looks to continue rille 2 onto Mare Imbrium. Because this thin rille appears to be an extension of rille 2, but has a different morphological character, I propose calling it 2a. A very similar narrow rille is labelled 2b, because it is near 2a, but it does have its own source vent. Finally, the gash- like linear feature at center-left of the LRO-WAC view is peculiar, and is more like a rille than an other class of lunar feature - I don't think it is a crater chain - so I propose calling in Plato 4. There is one definite rille west of Plato - number 5 - and another possible one that I need to study more before making a judgement.

This exercise demonstrates that more than one image is required to identify rilles. It also shows that considerable time will be required to research rilles on SLC, make sure they are real, and single or multiple, and also to look for previously un-numbered ones. You may notice that I didn't suggest a designation for the little rille above Plato J. That seems too little to need a number. But I did propose 2b for an even smaller feature because it has a source depression and might be discussed in some future paper about sources of mare lavas. The final lesson I learned is that it isn't easy to decide how best to provide designations for rilles. The numbers on the image above are not official - they are just an exploration and a (long) discussion of what could be done, not that it should. And of course, rilles were traditionally numbered with Roman numerals, and Arabic numbers have been used for domes (and Greek letters for elevations) so that rilles would not be labelled 1, 2, 3, 4 etc, but l, ll, lll, lV, etc.