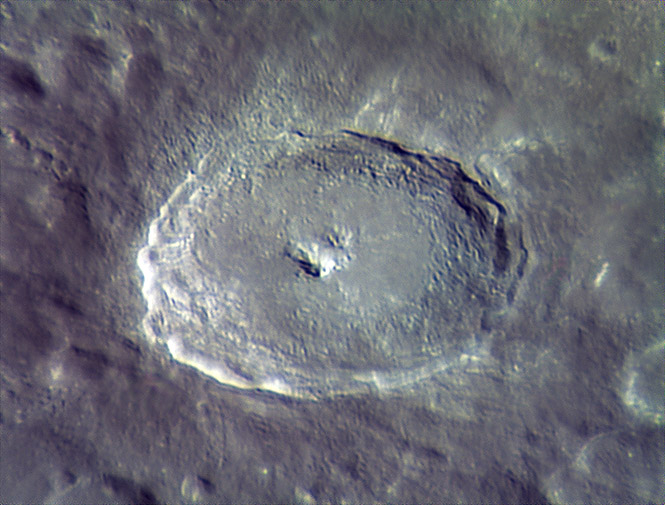 Regional scale color mosaics have been made by a number of imagers, but high resolution color views of individual features are less common. This one made by Pavel of the highlands crater Tycho has much more subtle color variations than maria views but had enough to cause me to look again, more carefully at a familiar scene. I've made the color differences more dramatic than Pavel did to emphasize the bright material just outside the rim. Along the north side of the rim, the wispy bright streamers are not radial to the rim but are angled about 45° to the east. There is much less of the wispy whiteness on the south side of the rim, but it also streams outward toward the east. We have seen before when looking at regional high Sun views that Tycho's rays are not radial but are strongly concentrated toward the east; Tycho formed from an oblique impact with the projectile coming from the west. Pavel's image shows the splaying out of the ejecta begins right at the rim crest. It also suggestions to me an answer to a perplexing observation I've wondered about before: What is the well-defined bright linear feature just east of Tycho, on the gray rim of Pictet? I now speculate that it is a chunk of ejecta from Tycho, bright because it an anorthositic, but more importantly because it was exposed to space weathering only about 100 m.y. ago, when Tycho formed, and hasn't had time to be altered to gray.


Yesterday's LPOD: How Big is the Moon?