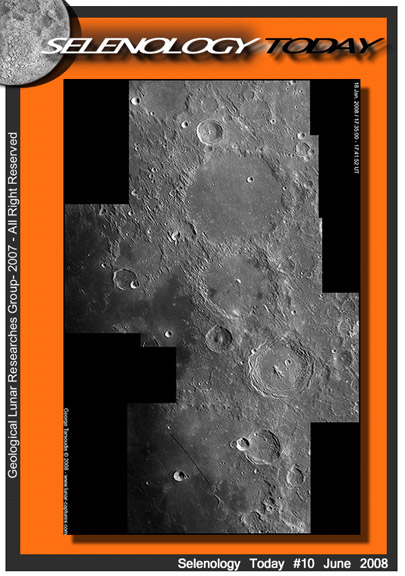 The 10th issue of Selenology Today has just appeared. It results from the unpaid effort of a half dozen or so editors and numerous authors, all amateurs and all producing a high standard of lunar science. ST is a direct outgrowth of the success of the Geological Lunar Research Group. The 83 page current issue of ST contains eight articles, including a tribute to the recently deceased ST editor Charlie Kapral, descriptions of domes, faults and even a terrestrial impact crater by two young authors, and a historical reprint of an amateur article about O'Neil's Bridge. The professional level is indicated by excellent articles on photometric calibration of images, and topographic and spectral measures of domes and rilles and qualitative modeling of their rheological properties. Just listing it all is impressive! Since the first issue in June 2006 ST has published many important articles that can be characterized by their quantitative and analytical approach to lunar studies. I would say that most important papers about lunar domes of the last decade have been published in ST in the last 2 years! Congratulations to editor-in-chief Raffello Lena and editors Maria Teresa Bregante, Charlie Kapral, Fabio Lottero, Jim Phillips, Piergiovanni Salimbeni and Christian Wöhler!

Chuck Wood
Note: I am listed as an editor of ST but really I am their chief fan!


Yesterday's LPOD: Shooting Next To Nothing

(1) I would enjoy reading about O'Neil's Bridge. Can anyone tell me what issue of ST features that article? I tried looking for it online but there are too many pages to examine in all the back issues of ST.
I'm interested in this because I like to point out the location of O'Neil's Bridge when I discuss Mare Crisium in my slide shows about the Moon. It would be nice to have more information.
--Bill

You are right - there are enough articles in ST now that an online index would be very useful!
--Chuck

(3) Thanks, Chuck. I'll look up the article.
I had some good luck this evening (6-6-08) while observing the waxing crescent Moon. The terminator was right at the western edge of Mare Crisium. Over a period of about 45 minutes, I watched the sunrise over Lavinium and Olivium promontories until O'Neil's Bridge came into view by about 10:30 p.m. DST. It seemed to flicker in and out at first--but then finally there it was. (Hope I was looking in the right place!)
--Bill

P.S. I just read the O'Neil's Bridge article in ST. Perhaps I was looking at the wrong time. (??) The author says the best time to see the "bridge" is during a 4-day waning Moon. This evening, during a waxing Moon, I was observing a dark area between Lavinium and Olivium that gradually became illuminated as the terminator moved west. The gradually illuminated area seemed to connect the two promontories, so I thought "Aha! There's the bridge!"
Well, I hope I saw the bridge--I'm not sure now.