Shooting Next To Nothing 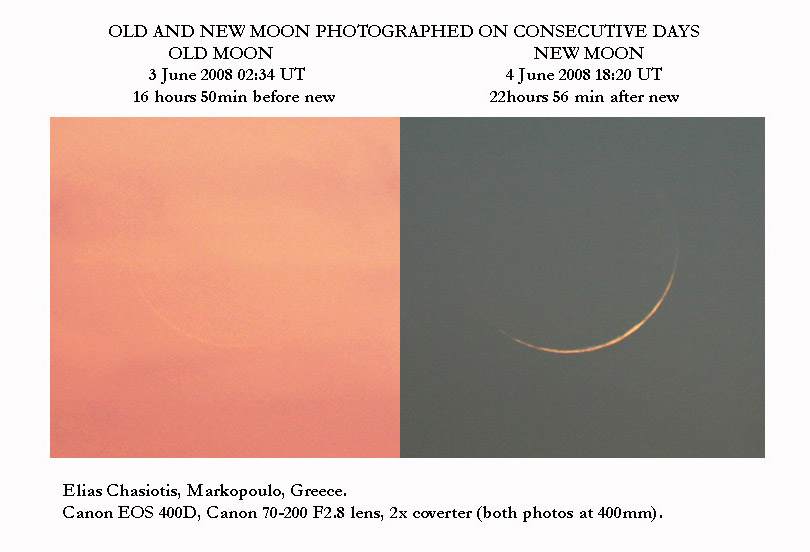 A number of imagers recently have been shooting the very thin Moon. Its hard to select just one for LPOD, but Elias' image has a unique claim to our attention: he shot the old Moon and the new Moon on consecutive days. There are only about 40 hours between his early June 3 image of the old Moon crescent and his late June 4 image of the new crescent. In France, Vincent Jacques captured a 15hr 48m old Moon crescent on the morning of June 3 and made a short video of the Moon's movement. Anthony Ayiomamitis in Greece caught the new Moon crescent almost the same time as Elias, when the Moon was just 23 hr 17m into its new lunation. The descriptions from these three imagers have in common a passion and excitement at seeing the elusive young crescent. Look tonight, the crescent, like a middle-age person, will be wider than before, but still will be glorious.
Chuck Wood

Technical Details
Elias writes: On June 16, 2007, after checking the visibility of the new moon in my planetarium software, i realised that there was a chance to observe the old and new moon on two consecutive days! (on June 14 and 15, 2007). Unfortunately I was too late, so I hoped that in 2008 conditions would be favourable again for my area. I was lucky because the time of new moon (19:24 UT) favoured Europe, as it did last June. Next was the weather. On June 3, 2008 conditions were very difficult because of scattered clouds and the moon was 17 hours before new, so quite dim and low. It was visible only with optical aid, but was finally caught in the photograph. Next day things were much easier, as a 23 hour old crescent appeared bright, higher in the twilight and the weather was clear.


Yesterday's LPOD: A Ring On Edge

(1) Chuck -- I don't want to take anything away from Elias' accomplishment, but at the New Moon of May 5th, German amateur Martin Elsässer demonstrated that with careful shielding of the telescope and the use of an infrared filter to darken the sky, in some months modern technology makes it possible to continuously capture daytime images of the Moon as it skirts by the Sun. On May 5th he was able to successfully image the thin lunar crescent right through the Moon's moment of closest approach to the Sun (4.5725° between centers at 11:58 UT, as seen from his location on a Munich rooftop). On his web page Martin posted images (comparable to Elias' left-hand one) showing the appearance of the crescents that can be teased out of the photographic noise 5 minutes before and 44 minutes after geocentric conjunction (the official moment of "New Moon"). This may not have the romance of searching for crescents low in the sky before dawn and after sunset, but it yields an interval some 50 times shorter than the one illustrated here. Only some passing clouds prevented Martin from photographing the Moon at its official moment of newness (12:18 UT). -

(2) I think we should also note that the photos taken by Elias--and other photos that appear as LPODs--require a lot of skill, planning, and excellent timing. LPODs are not casual snapshots. The authors are doing excellent work.
--Bill Murmann

(3) Thank you both, Jim is right, there is also a related link of the LPOD of January 31, 2008: LPOD Jan 31, 2008
Martin's work is still not widely known, i still haven't found an article about his great achievement in the astronomical magazines!
Anyway, my captures are in the visible light and the fact is that under similar favorable conditions and good transparency both crescents could be easily observed with optical aid or even with the naked eye!
There is also a beautiful photo of the same event from last year by Vincent Jacques:
http://epod.usra.edu/archive/epodviewer.php3?oid=379840
Elias Chasiotis