A Ring On Edge 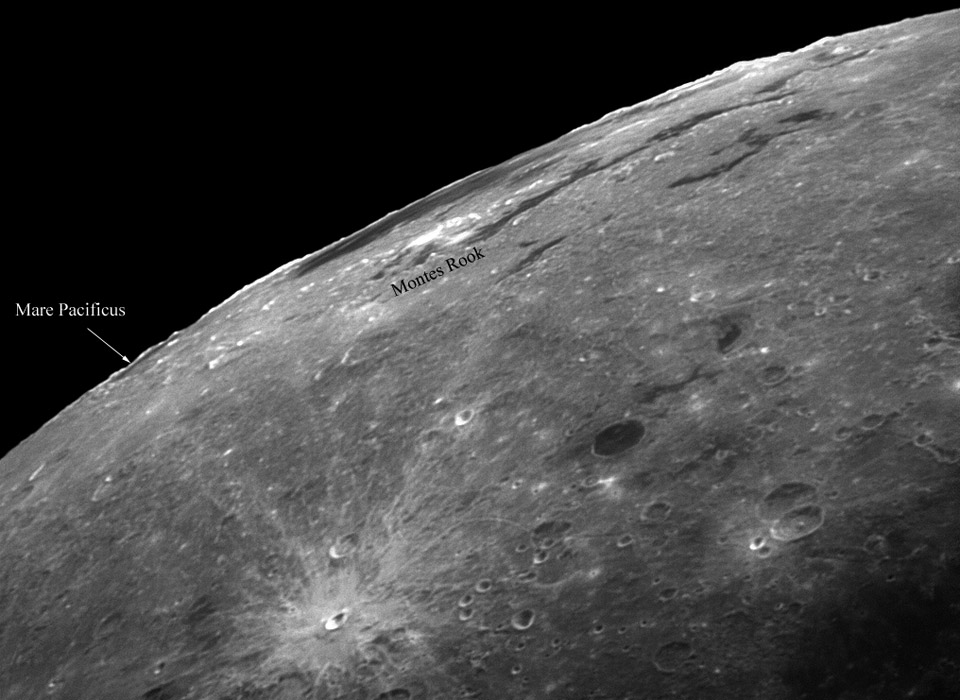 Howard writes: Here is an image of a very unusual lunar feature on the far side of the moon that can rarely be seen from Earth. My image from the 28th of May shows the northern most portion of the ring unofficially known as Mare Pacificus. The image, however, shows no hint of the ring structure. The Clementine image shows clearly the ash ring with a strange linear feature near the center at the crest of the Montes Rook. I wonder if the two are connected or if this is merely a coincidental alignment. If they were related, it would be hard for me to understand how such dark ash could come from a fissure with such bright albedo. Therefore, I hypothesize that the two are not related, but I am at a loss to offer an alternative.

Howard - good photo and good observation! I did not know that this feature could be glimpsed from Earth - certainly we would not think it was anything other than another small mare patch in Orientale. But the Clementine image shows that it is a well-defined ring of darkness. The spectral colors match pyroclastics, so it is a giant ash ring. The odd elongated depression at the center of the ring is undoubtedly its source or vent. The vent is bright because it has relatively steep sides and downslope slideing of material will continually expose fresh material, not yet darkened by space weathering. The same process makes the walls of some old dull craters bright. The fact that there is no volcanic cone built up around the vent, and the limited coverage of the dark ring both suggest that this resulted from a single, or small series of powerful volcanic explosions. If there had been a long eruption it might be expected that a range of ejection angles would be covered and the ring would be a broad diffuse dark zone. This is a unique feature on the Moon. There must have been a very unusual circumstance that caused this eruption to occur.

Chuck Wood (from the Denver airport- thanks to free wireless access!)

Tomorrow's LPOD: Shooting Next To Nothing

(1) Chuck – There's a similar view in the LPOD Photo Gallery taken by Stephen Sharpley some 10 hours later from Australia and some discussion of the viewing angles here (you have to click on the "Attachment" links to see the illustrations). Although the basic libration in longitude was slightly less, Stephen has a geographic advantage for seeing the Moon's southern hemisphere, so he actually saw the ash ring about 0.5° farther onto the disk -- although you have to look very closely to see any differences. At the time of Stephen's photo the center of the ring was about 88.6° from disk center, and it looks like there are times (for example, July 14-15, 2009) when he could see it another 2.3° onto the disk. -- Jim Mosher

(2) Is that a long, curving rille that sweeps in from the left side of the image and curves sharply down into the bright crater at the bottom of the image? Or is it just an artifact of some kind on the photo? That sweeping, smooth curve above and into the crater looks strange.
--Bill

(3) Yes Bill, it's Rima Sirsalis. And I realy like soft touch of this photo and beautifull curve of the rille on this photo.
-- Aleksander Božič

(4) Thanks, Aleksander. I noticed the rille and especially the curve because it looks so smooth. That is an impressive rille. I assume that the dark crater is Cruger, and the bright crater is Byrgius. (??) And that we are also seeing Lacus Aestatis. (??)
--Bill Murmann

(5) Bill, I think you are correct with the bright rayed crater being Byrgius A, the dark crater is Cruger, and next to Cruger is Lacus Aestatis. What is interesting is to the right of Byrgius A is another bright crater which normally has some rays with it but not in this photo. This photo shows it to be more of bright nimbus than actual rays. The crater is Sirsalis F if I am correct. -- Andrew Martin SFO

(6) By the way...
Byrgius A, also called La Paz by H.P.Wilkins and his colleagues. I wonder who La Paz really was. Could this have been the legendary meteor-investigator Lincoln La Paz? (known of the so-called "green meteors" of 1948).
-- Danny Caes.

Danny - Yes, I.m sure it was Lincoln La Paz. He is also famous for observing a UFO, which probably harmed his scientific reputation. http://www.angelfire.com/indie/anna_jones1/lapaz.html
--Chuck