How Deep is That Hole? 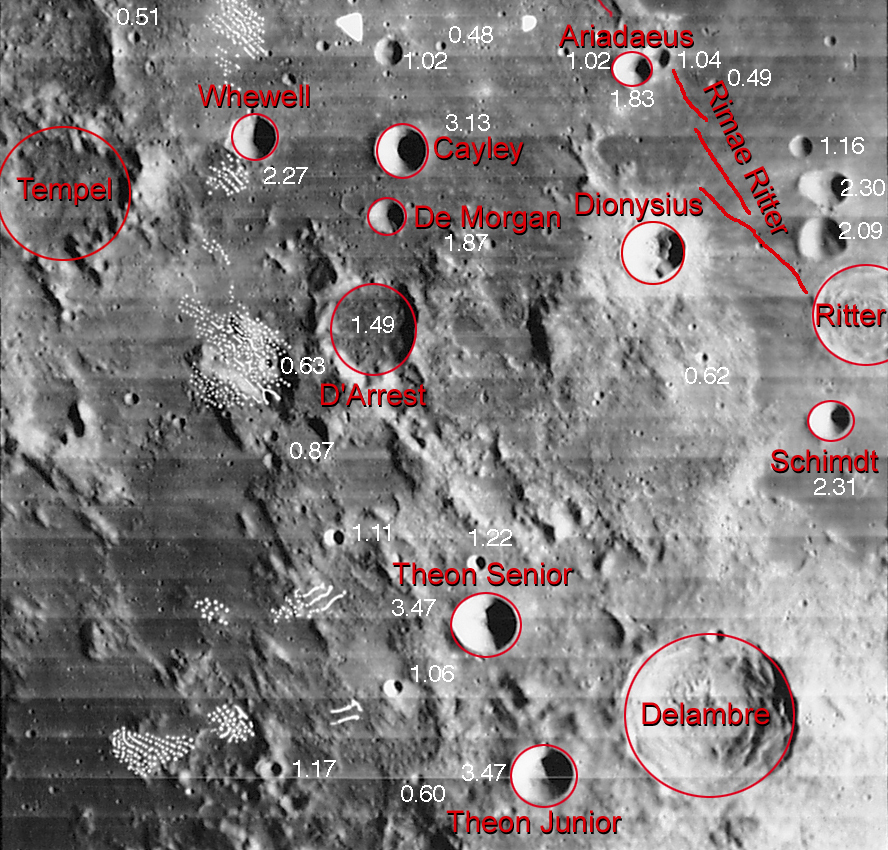 The largest catalog of precision depths of lunar craters was created in the early 1970s based on shadow lengths measured on Lunar Orbiter IV photographic enlargments. As a graduate student at the Lunar & Planetary Lab in Tucson I directed a small team of undergraduates in the cataloging, including measuring shadow lengths, of every named and lettered nearside crater and any others larger than 7 km in diameter. Unfortunately, my catalog was never published, although in 1974 Dai Arthur, the project director, published the depths of ~1900 nearside craters with names or letters and the mathematics for calculating them. There were also many additional unnamed craters with measured depths but that information appears to have been lost. Back in the 70s I compared our crater depths with those determined by Dick Pike from the stereo-derived topo maps made from Apollo metric and pan images. I regard the topo map depths as being the gold standard - although Pike determined average depths and we measured maximum depths (from the longest shadow lengths). For craters smaller than 15 km diameter - and having no floors (hemispherical shape, roughly) our depths were 60 m shallower, but for similar diameter craters with small flat floors there was no difference. Pike compared 45 craters of larger diameters and found that our Orbiter shadow length depths were 5% shallower than the topo map depths. For a crater of 3 km depth that is a difference of 150 m. Because of the irregularity of crater rims and floors for large craters, 150 m is not a large difference. The accuracy of our Lunar Orbiter crater depths is about +/- 100 m for large complex craters, and probably 25-50 m for smaller simple craters. Kurt Fisher has digitized the two fundamental list of crater depths (Arthur and Pike), and also measurements by John Westfall, but the method for determining the later has not been published and there is no available information on their accuracy. Earlier measures in Cherrington’s Exploring the Moon Through Binoculars and Small Telescopes and in older books should be ignored since there are systematic errors in all previous terrestrial measurements. Recently, Jim Mosher and Henrik Bondo have introduced Lunar Terminator Visualization Tool (LTVT), free software which offers the capability to determine heights associated with shadow lengths on any image. This opens the door for amateurs to make accurate determinations of the heights of peaks and the depths of craters for far more lunar features than ever before measured. In particular, the depths of large craters were often not measured on the Orbiter images because shadows did not reach the floors on those relatively high-Sun images. Such craters would be ideal targets for imagers and measurers - here are some craters in need of accurate depths: Abenezra, Agrippa, Albategnius, Aliacensis, Almanon, Alphonsus, Arago, Archimedes, Aristarchus, Aristillus, Arzachel and Autolycus - and that is just the A’s! Users of the LTVT software should compare their results with the Arthur or Pike catalogs to make sure they are getting valid measurements, and then go after unmeasured craters!

Yesterday's LPOD: Ring Around a Basin