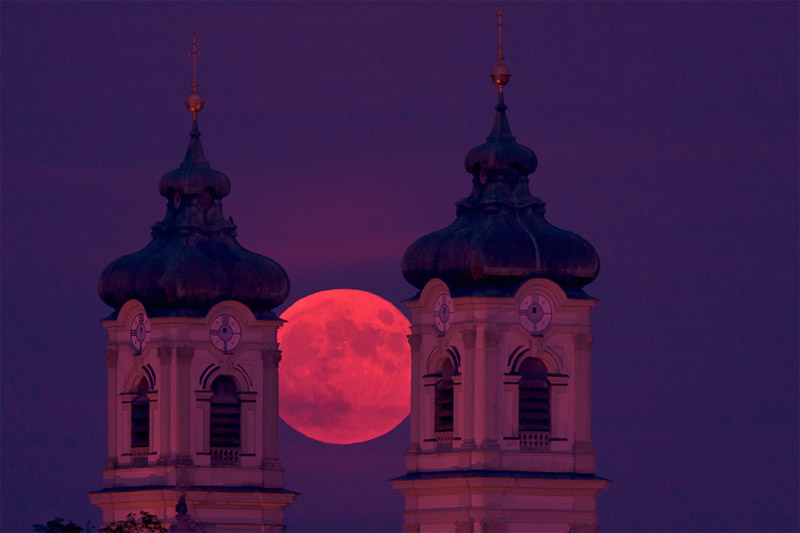 The Moon had been bad and when it tried to rise, the guardian towers refused to let it pass. The Moon huffed and puffed and got red in the face, but it made no difference, it couldn't rise into the sky. The Sun set and as the night wore on people could see a redness in the east but the sky was unusually dark - where was the Moon? The smugglers who counted on the Moon's light to guide them lost their way. Deep sky observers were delighted by the unexpected dark sky, and hospital emergency rooms had a quite night. When all the people realized that the absence of the Full Moon made life better for the good guys, and tougher for the bad folks, they voted to permanently keep the Moon locked up in the daytime sky. Sometimes you will see it, blue with embarrassment, inconspicuous in the daylight. Rarely it gets so desperate for attention that it moves in front of the Sun, but it quickly regrets its action and moves away into obscurity. After a while people forgot it existed and when they made plans for space exploration only thought of Lagrangian points and Earth-approaching asteroids.

Technical Details
The most southern moon rise this year. We determined the right location with the help of GPS and Google Earth to get the exact angle for the moon rising between the towers of the local basilica. Canon EOS 40D, Borg ED 77, 1/50s, f6, ISO 800 - postprocessing with Photoshop.

Tomorrow's LPOD: Remnant of a Ring