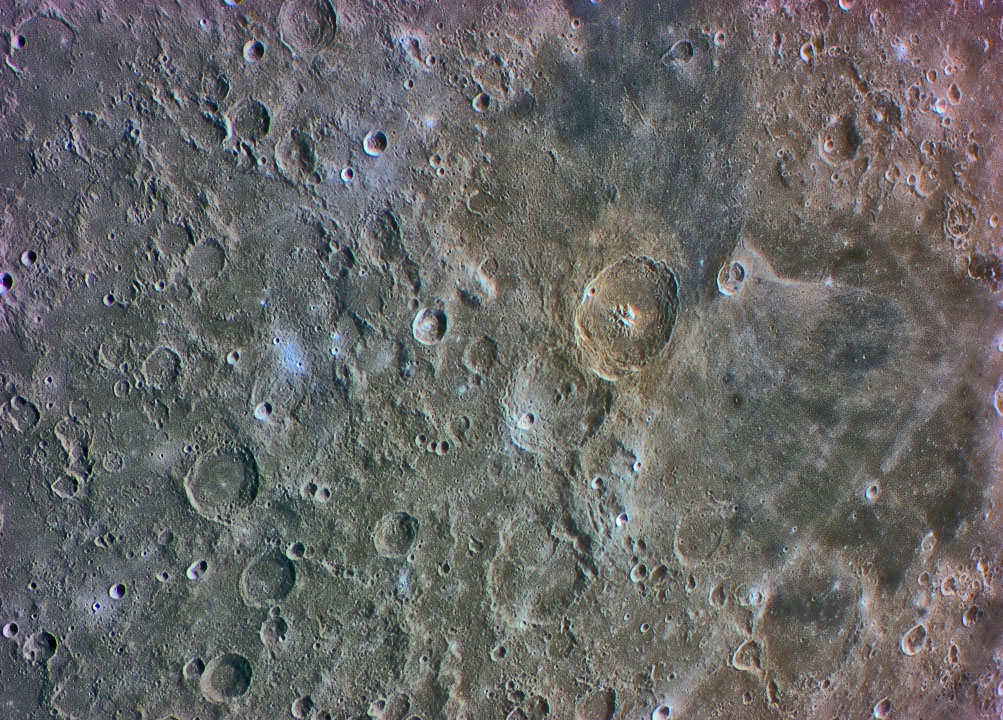 What is the first thing you notice about this image? Is it the dull yellow hue around Theophilus, the blue splotch near the Apollo 16 landing site, or maybe the pale roseate glow at upper right? The wonderful thing is that Dmitry's color image - which I have enhanced more than he did - reveal these color tones. Our challenge is to try to understand what these colors mean. The dull yellow is obviously associated with Theophilus and therefore may be due to ejecta from that crater. It is interesting that the yellow material is very sharply bounded on the east and north sides - in fact, it looks like the ejecta was blown toward the southwest. SInce the Moon lacks winds, an oblique impact could account for the uneven distribution (but the impact melt is greatest just out side Theo's north rim). Also, look at the rays east of Theophilus on Mare Nectaris. I don't know that any of them come from Theophilus. The rays are most closely connected to Madler - just to T's east - but their distribution is very weird, especially the truncated fan to the northeast. Another oddity of the ray material on Nectaris is the string of roughly squarish bright spots that parallel the ray near Rosse. I don't think that the spots are related to Madler - are they very peculiar ray clusters from Tycho? Well, we didn't get to the blue splotch or the roseate glow, nor the lovely dark halo craters - every picture like this deserves a chapter, not an LPOD.

Tomorrow's LPOD: Laurel And Hardy, Too