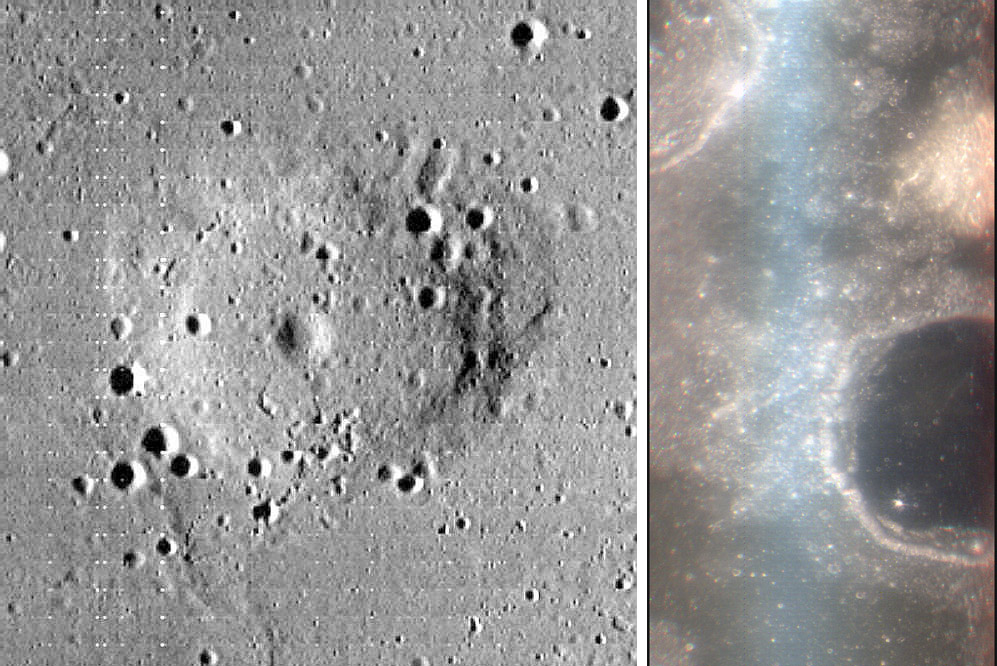 These two images perhaps hint at why the LRO camera team has released few Wide Angle Camera images. Many adjustments have to be incorporated to produce geometrically and photometrically correct renditions. The closeup view of the Milichius Pi dome (left), processed by Rick, shows rough textured material beyond the round edge of the dome, either dome material or older mare basalts not covered by the younger flows that surround the structure. The image has artifacts, showing that further corrections are required in its reconstruction. Rick also created the first two color composite images from WAC data, and on the left is the third, processed by Maurice. This shows both the already known real color anomaly of the "Arrowhead" north of dark-floored Billy, and a blue column of false color to the left. Rick has noticed that the color channel images need a subpixel re-alignement because of camera shifts during exposure when they were aquired by the LRO WAC. The color images are tricky to process properly, but in just two days the first color images have been made and improvements will continue. And John Moore has created the first amateur WAC image specifically to address a geologic interpretation, so I think continuing improvements of WAC processing by amateurs will greatly enhance our exploration and understanding of the Moon. And India just announced that its space agency will release all of the Chandrayaan-1 lunar data by the end of the year, making more data available!