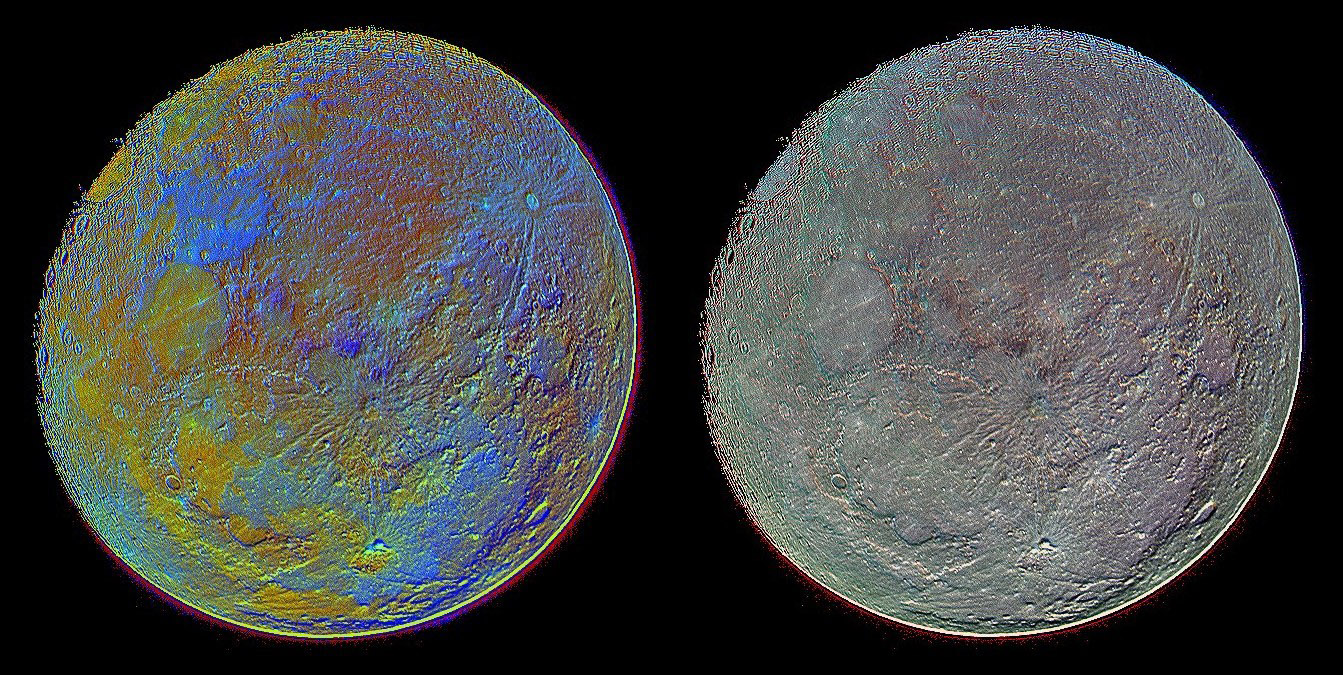 This double Moon image is a maturation ratio image (left) and mafic ratio image (right). They show the "freshness" of the surface (maturation ratio) and information about surface composition (both mafic and maturation ratio images). I wanted to reproduce this technique that is used by professionals to study the Moon, Mercury and Vesta. In my "petrographic" Moon images I used several filters: 1000 nm longpass and 940, 905, 745, 425 nm bandpass filters - these filters are close to bands described in papers (like Selenology Today). With these filters I used 65/420 nm TSAPO65Q and Atik 314L+.

What's unusual is the need to divide one image by another. To make mafic and maturation ratio image, space weathering must be taken into account. The longer time that regolith is exposed to the Sun, the darker it gets (and thus it could give a false positive result in a band in which given mineral absorbs light). Scientists analyzed the problem and found that a ~750 nm wavelength image is a good reference (no absorption by minerals that are covered by other filters from the list), and so:

RGB false color images created from such sets can show the Moon in various colors. Each color has a meaning, for example, blue parts on the maturation ratio image will usually mean fresh material. Green color on the mafic ratio image is related to olivine presence and so on (check Selenology Today #19). My filters aren't dead centered on those wavelengths, but still the results seems to be correct with the color meaning.

My Maturation ratio image can say:
- Tycho and it ejecta are blue due to being fresh.
- Dark blue area by Copernicus - basalts low in titanium (?)
- Old highland areas are red or orange.
- Maria are rich in Ti - ligh blue
- Volcanic rocks rich in Fe - yellow (also newer maria regolith may be yellow)

The filters I used are described on my webpage.

Tomorrow's LPOD: Another One