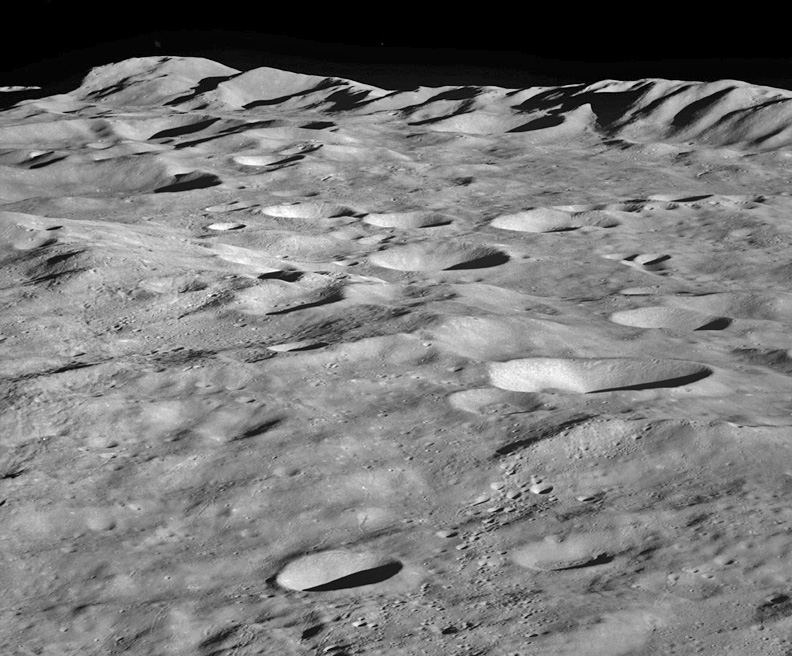 Looking obliquely, one of the Apollo 8 crew (Borman, Lovell or Anders) shot a few frames of a magnificent lunar mountain range. None of the foreground craters is easily recognizable and the mountain range itself does not look like the craggy scarp of the Apennines or the shear fault of the Altai. What and where is it? Some of the photos immediately before and after this image are of recognizable farside craters allowing us to identify this range as part of the northern rim of the 2500 km wide South Pole-Aitken (SPA) impact basin. I don’t know the exact coordinates of this view but it is somewhere between the basins Apollo and Korolev – can you find out where it is exactly? According to Clementine altimetry data the SPA basin rim is only 1.8 km high, but this looks taller than that. There may be another lower and more degraded basin ring arcing through the center of the image from upper left to lower right. I also expect that there is a young impact crater off the image to the bottom that is the source for the cluster of secondary craters near the bottom right.

Yesterday's LPOD: A Corner of Decay