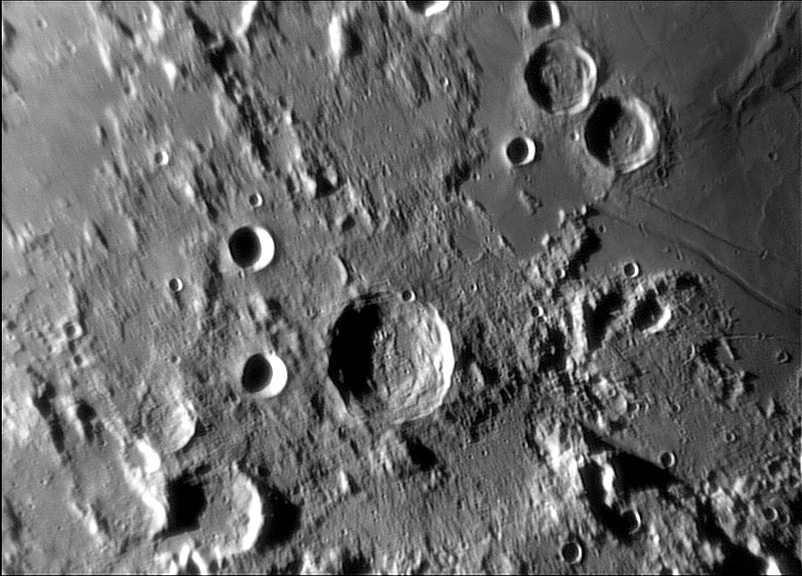 Delambre is a standard, mid-size (diameter 52 km) crater with slumped terraces and some sort of odd layer across the floor, perhaps covering a central peak. But in looking closely at Carmelo’s technically fine image the eye sees a persistent pattern of lineations that trend from north-northwest to south-southeast. This subtle grain parallels the edges of ruined craters and secondary crater chains on the left side of the image. These features are both delicate and coarse reminders of the surge of ejecta that scoured the surface from the formation of the Imbrium basin about 3.8 billion years ago. But now look even more closely at the top and bottom of Delambre – there is a faint but definite pattern of lineations nearly at right angles to the Imbrium direction. Narrow, bright-edged parallel ridges cross the northern (top) portion of Delembre’s rim and extend pass Delambre D (the small crater on its rim) to the east for 5-10 km. And southwest of Delambre’s southern rim are hints of a wider, longer and more obscure pattern of ridges paralleling those on the north of the crater. This southern strip continues through the crater’s inner wall and perhaps to the southeast of the crater. I have no idea what these ridges are – or even if they are real. Is it possible the subtle ridges perpendicular to the Imbrium direction are an artifact of processing? It seems unlikely because this pattern doesn’t occur anywhere except near Delambre. In looking at Lunar Orbiter images and Consolidated Lunar Atlas images I catch no glimpse of them. But Carmelo’s image combines high resolution and low sun in a way that is superior to either of those earlier images. I think the pattern is real, but what geologically explains it? On Earth, parallel ridges often reflect tilted layers of rocks – that seems unlikely here. I think, once again, that an amateur image shows something that we never knew existed. Great!