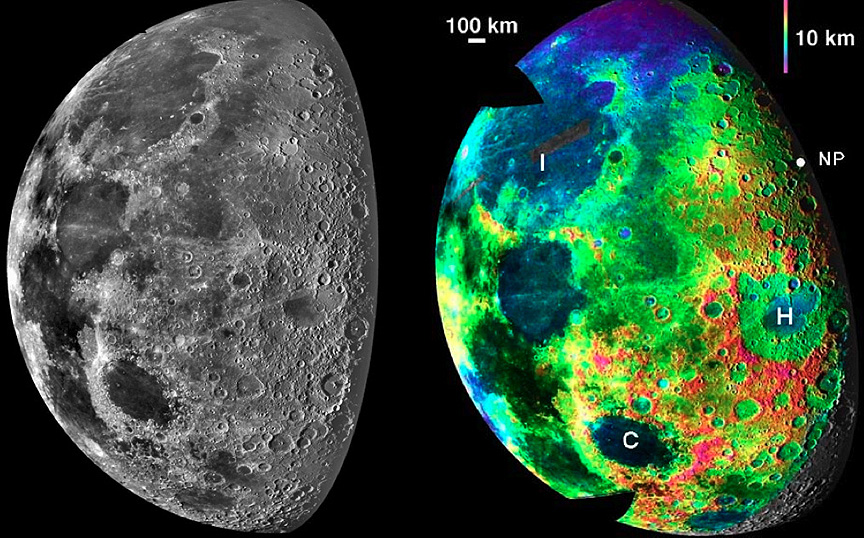 It has been more than a decade since the Galileo spacecraft flew past the Earth and Moon picking up energy for the outbound trip to Jupiter. Galileo obtained some of the first modern images of the Moon including the mosaic on the left of the north polar region. There were multiple images of the region and now Ben Bussey and Paul Schenk have recovered the stereo information from the different views to construct a new topographic image. Their interest was the topography just near the poles, trying to refine knowledge of possible peaks always bathed in sunlight that could be potential locations for a lunar base. But the topo image also beautifully maps out the topography of the Humboldtianum (H on the map) impact basin. The rim is famously non-circular with an abrupt bend in its southwest corner. That is also the highest area, which looks from the scale bar, to be about 3-4 km above the center of the mare. The rim is noticeably lower on the northern and eastern sides. It is common for basins to have rims of unequal height – Imbrium lacks a western rim, Nectaris lacks an eastern one, and as this topo image shows, Crisium’s western rim is much lower than its eastern rim. We don’t know why such unequal rims are so common – perhaps most impact basins were oblique impacts with the higher rims marking the downrange directions.