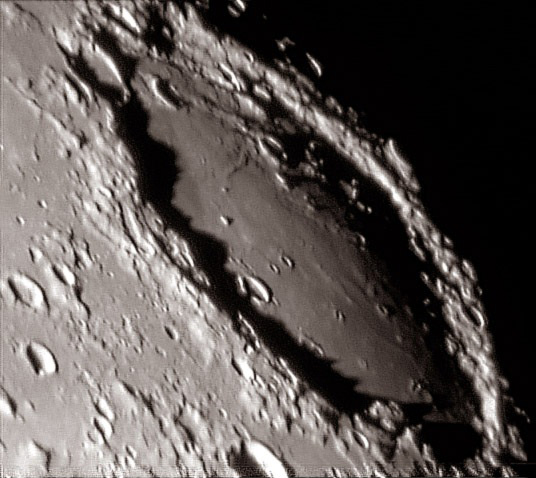 I love this image of Schickard. It reminds me very much of the marvelous photographs taken by French astronomers in the 1940s with the Pic du Midi one meter telescope. The easiest place to find those images today is in the 1964 Atlas of the Moon by Vincent de Callataÿ. Those pictures were well ahead of their time in resolution but it was their tonal qualities that entranced me. Giancarlo’s image is in color with a sepia feel, but even in black and white the classic tone is still there. Another characteristic of the French photos was their rich blacks, which is also captured here. But Giancarlo’s image is more than a quaint throwback to another era. The low sun reveals ridges and surface features that I did not know existed. The ridges should have been expected for the two ends of the floor of Schickard are dark mare material (and the middle is dusted with bright Orientale ejecta). Unlike impact basin mare, these mare ridges do not have a concentric pattern, suggesting that they were not controlled by subsidence due to the weight of the lavas.

Tomorrow's LPOD: A Penchant for Names