Was Aristillus Formed by an Oblique Impact? 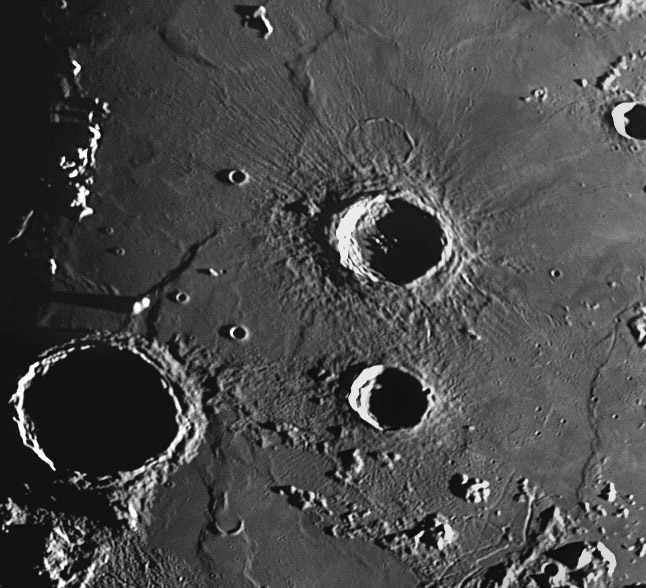 I am always delighted to see something in an image that I hadn't noticed before, and K.C.'s new image delights me. The view above is just the center of his mosaic showing the classic area from the Apennines to Plato. The uneven distribution of the radial ridges, grooves and crater chains (R & G) from Aristillus immediately caught my attention. This close in ejecta is very well developed to the north-northwest, and weaker but still obviously there in the opposite southeast direction. But it is missing in the direction toward Archimedes and is very weak toward Theaetetus (upper right). These roughly north-south directions are exactly where the cross illumination from the Sun would best show small scale topography if it were there. See the very weak but distinct R & G to the southwest of Autolycus for a good example. Was Aristillus formed by an oblique impact with the projectile coming from the southwest or the northeast - directions where the R & G are weak or missing? I immediately looked at the LRO Quick Map for a high resolution answer, but the lighting is too high. Quickly searching the Moon Wiki for Aristillus I was led to Alan Friedman's magnificent view shows that rays are extensive to the northwest, to the north and east, but not to the southwest. If the oblique impact hypothesis is true the existence of rays (even if no R & G) to the northeast implies that the projectile came in over Archimedes - that would have been dramatic to see! The fact that this is not a butterfly wing distribution of rays and ejecta - as at Messier - suggests that the impact angle may have been 20-25°. This proposal relates to - explains is too strong a claim - the dark ribbon that rises up and over the northeast wall of Aristillus - this is impact melt or other dark ejecta that was deposited down range.