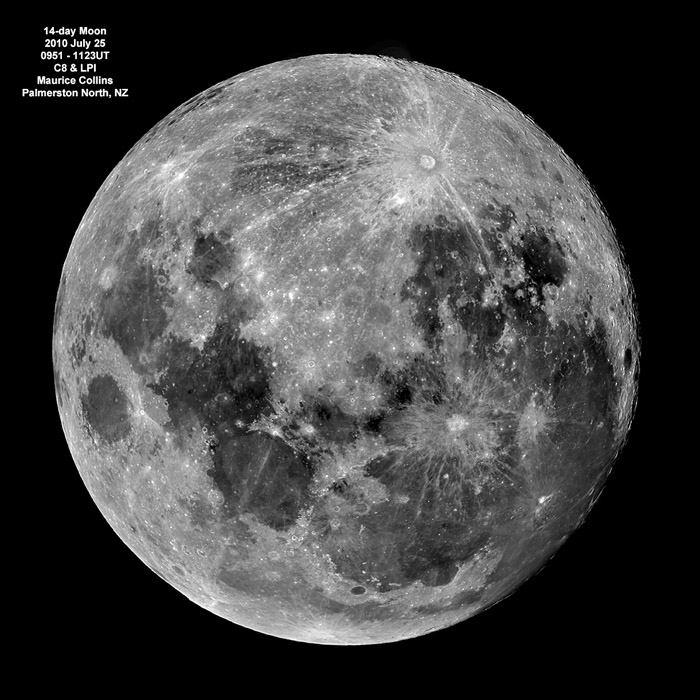 Northern Hemisphere summer is a tough time for LPOD because the Moon is low and clouds seem to be everywhere, so few images are submitted. But deep in the south, Maurice confirms what the almanac says: its full Moon time. I love full Moons because there is the chance to see familiar features in a new (overhead) light. One of the always surprising observations is how much variation there is across the maria. Some bits, like the eastern edges of Serenitatis and much of Tranquillitatis are fairly dark, but many areas are lighter, due to mineral composition and ray lightening. Most of Frigoris is a flat gray, like Lacus Somniorum, north of Posidonius. Something strange in this image is the dark area south of Mare Nectaris that doesn't look unlike some maria. This well-defined patch is between Tycho and the twin headlights near Stevinus. It looks much darker here than on many other full Moon shots such as this one. I don't think there is an overlooked cryptomaria in the southern highlands, but this image and its processing - which I have added various enhancements to - does clearly define an extensive area of darkness in the highlands. Part of the darkness could de due to the plutons that are revealed in some young crater ejecta here, but in general I don't think we fully know how to explain it.