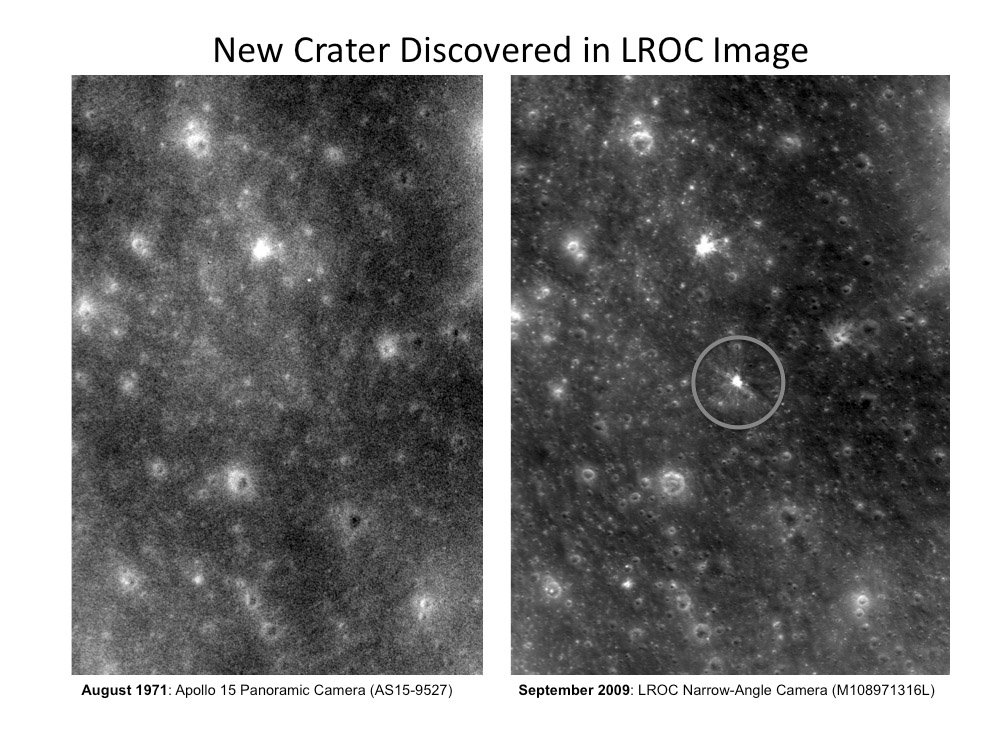 The quest for changes on the Moon deluded observers in the 19th century to think they had found them at Linné, on the floor of Plato and inside Aristarchus. But they did not have the optical means to detect the changes that must and do occur. Finally, we can document the positive answer to the old question, does anything ever change on the Moon? LRO has found five impact craters on regions where high resolution images from Apollo, 35 to 40 years ago, showed none. We knew they must be there because meteors and meteorites enter Earth's atmosphere, which burns them up or slows them down, so that few craters form here. But on the Moon those little projectiles plow into the surface at cosmic velocities, creating bright new craters like the one above. This little feature, younger than me, is only about 10 m wide, far too small for terrestrial observers and nearly all previous lunar orbiters to image. But LRO can and will continue to detect these small features. As the numbers grow we can determine the cratering rate right now in solar system history. We can use this, like the radiometric dated samples from Apollo landing sites, to calibrate models of cratering thru time to improve age dating across the Moon. And because new craters have been detected on similar high resolution images of Mars we can, for the first time, determine the difference in cratering rates at two points in the solar system, the beginning of a robust chronology for the solar system. Congratulations to the LRO team! And of course, the chase is now on to see which amateur will first discover a new crater, using LRO and Apollo images.

The new crater is on the eastern edge of the crater Franz, shown on Rükl plate 25