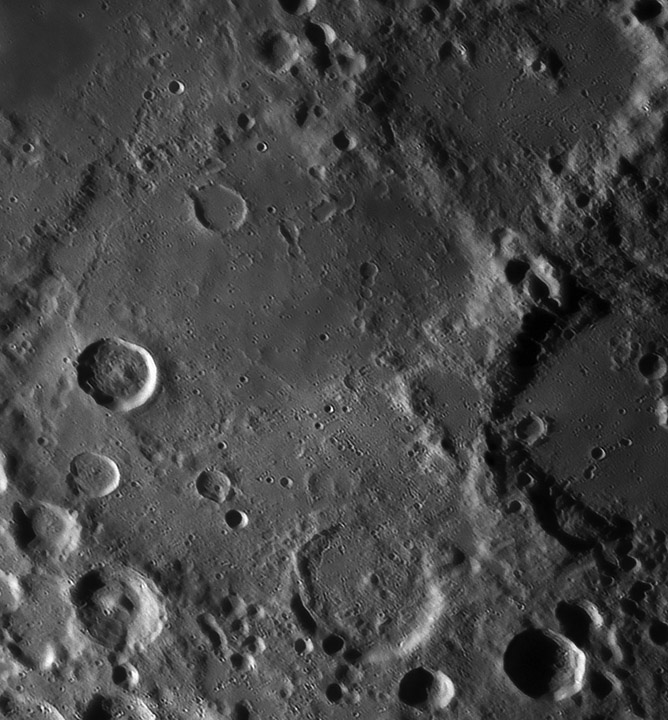 Deslandres has been featured on LPOD a number of times, and each new image reveals something new. This piece of a larger image by Paolo has a tonal balance that shows different floor characteristics. The southern part of the floor is lighter hued, more cratered and slightly more elevated than the northern half. The north appears to have a smooth surface sheen as if it is a lava. There are a dozen or more craters that have been covered entirely or partially filled by the smooth fill on the northern floor. At the very top of the floor of Deslandres is a patch so dark that it is visible at full Moon. This appears to be mare lava, rather than pyroclastics for there are no eruption vents visible. This broad area of smoothness stretches across about 160 km of northern Deslandres - I wonder if it is an old crater superposed on Deslandres, enlarging it toward the north. One final feature. Notice the string of about 12 closely spaced craters at the top left of the frame. Jump across the rim of Deslandres and a half dozen similar pits continue in the same trend. These could be secondary craters from Tycho, but they seem too old. Perhaps this is another example of a crater chain such as in Davy Y that formed from a series of impacts from a shredded projectile. I wonder.