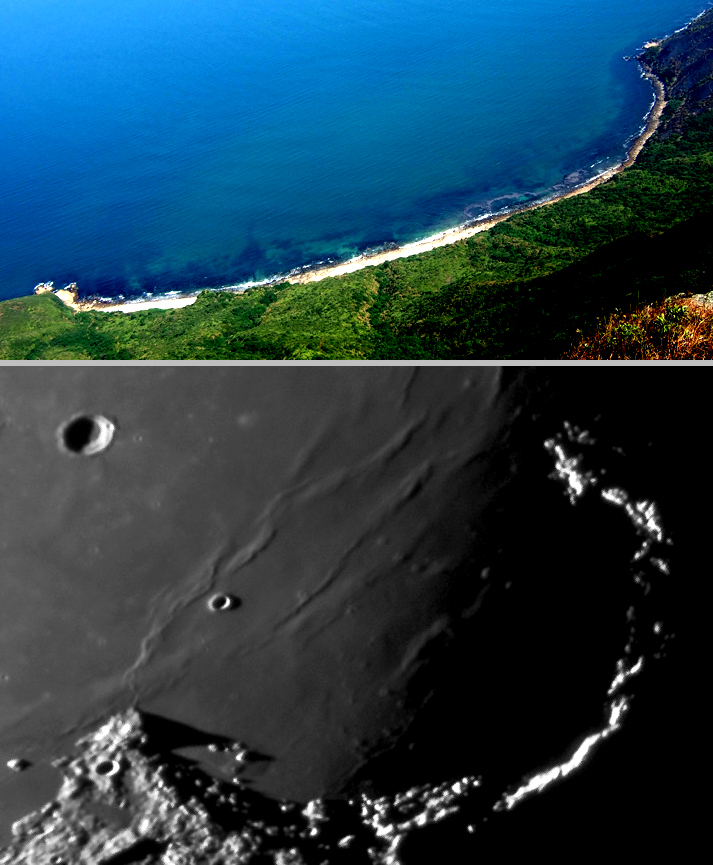 Comparative planetology is a powerful approach to understanding processes on different worlds. It has been used since early observers compared lunar features to landforms on Earth. The first stage of such a comparison is simply noticing similarities in morphology. Here KC points out the curved shores of a small bay on the East coast of Hong Kong with the Bay of Rainbows on the Moon. KC does not imply that Sinus Iridum resulted from water erosion of less resistant rock, but the similarity of a lowland being surrounded on three sides and open on the fourth is striking. In fact, that is probably why Riccioli called it a sinus/bay about 360 years ago. If we look more closely we see that bays on Earth occur along interfaces of land and liquid. That is true on the Moon too, but we also notice that completed lunar bays (craters) occur away from interfaces of mare and highlands, but not on Earth. So we might conclude that different processes caused the three landward sides of the bay on the Earth and the Moon. But there is a similarity in that the sea sides have missing walls. Did erosion remove the sea sides of lunar bays? Maybe. Was it erosion by mare lavas that destroyed the western rim of Le Monnier or the northern rim of Letronne? Or were these simply craters that formed on the edges of basins that dipped (or faulted) down toward their centers? There is little evidence for lava erosion of crater rims, yet the walls of Flamsteed P and other craters in the maria are often missing. Looking at a beautiful bay in Hong Kong caused us to consider how bays form on Earth and Moon, and even though there are few similarities in the processes, the thinking has been informative.

Tomorrow's LPOD: How High the Moon (And Low Too)?