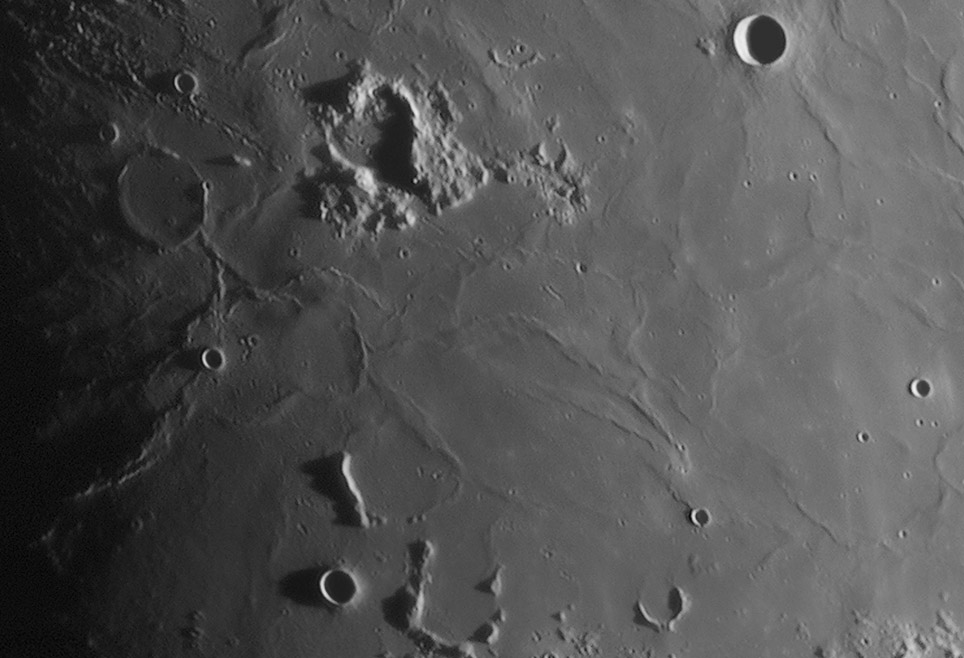 Like babies, nearly all new craters are beautiful. They have a pristine shape, simple or complex, depending on their diameter. And like humans, as craters age degrading things happen to them. They loose their fresh appearance by being splattered or squashed by subsequent nearby impacts, or they may be inundated by lavas. The ultimate indignity is when a new larger crater forms on an existing one - from dust to dust. This small piece of a mosaic by Stefan demonstrates a variety of stages of crater destruction. At upper right is Nicollet, a relatively fresh, 15 km wide crater in the transition diameter from simple to complex. Nicollet's ejecta has been mostly covered by Nubium lavas - it's not as fresh as it seems. Nearby Wolf (top-center) is a cluster of three overlapping craters, with missing common rims - it was the local high spot on the Nubium Basin floor. Other craters weren't as lucky - when Nubium lavas flowed (about 2.8 and again 3.6 b.y. ago) - they were nearly completely wiped out by piles of basalt. Near the bottom center of the image a couple of horseshoe-shaped rim remnants mark two originally normal impact craters whose walls were somehow mostly destroyed and floors covered. A nearby ridge looks like all that is left of a larger crater's rim, and above it two other overlapping craters are indicated by roughly circular mare ridges. Finally, near the terminator west of Wolf is a beautiful ghost crater whose rim is draped by lava, and a few tall rim peaks stick out in memory of its lost youth.

Chuck Wood
This is a repeat of a classic LPOD from Sept. 30, 2008; it received no comments then, will it now?
I am returning from a trip to Boston on Wednesday and hope to find plenty of great new images waiting in my e-mailbox!