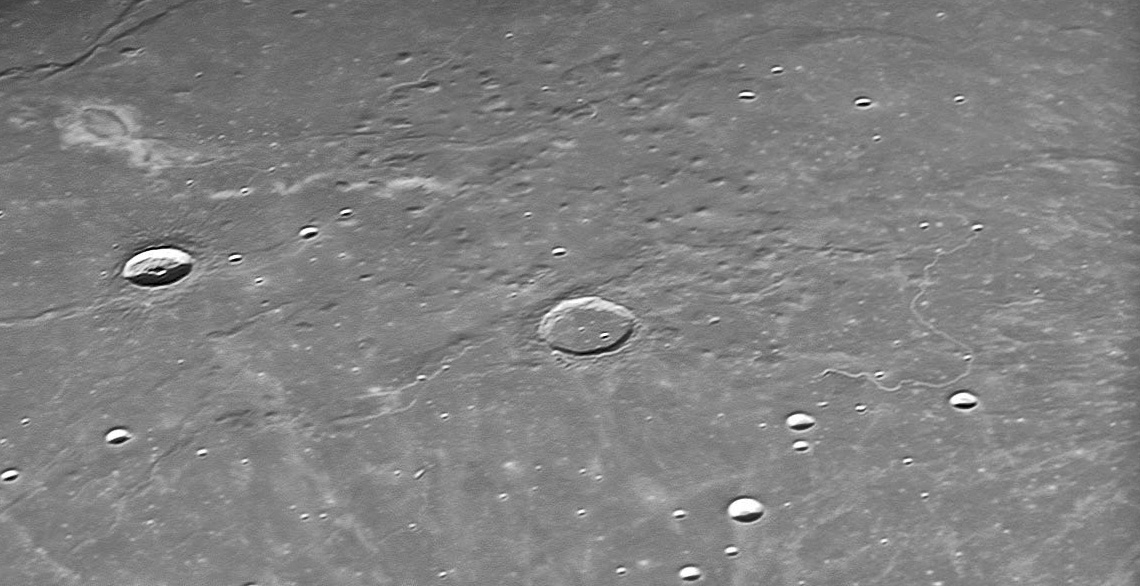 In September 1971, Apollo 17 landed in the Marius Hills volcanic complex, finally collecting the samples that documented the mildly explosive volcanism that formed the small cones… Isn’t that the way you remember Apollo 17? It could have happened that way because the tentative plan for future Apollo missions that NASA released just days after the success of Apollo 11, listed the Apollo 17 landing site as the Marius Hills. What an expedition it would have been! This is the largest volcanic complex on the Moon (neglecting all the maria, of course) and no one understands why it exists. It appears that the entire area may be slightly higher than the surroundings, like a miniature version of the Aristarchus Plateau. The Marius Hills includes hundred of slightly steep hills and flat domes and three sinuous rilles. Spectral studies show that the steep hills have volcanic ash on them, indicating that explosive eruptions built them. The domes were formed by non-explosive flows of lava. And the sinuous rilles probably formed from greater rates of flow of lavas. To the left (south) is the sperm-like Reiner Gamma bright marking. This feature is associated with a strong magnetic field but seems to have nothing to do with the Marius Hills. There will be lots of things to learn when we get back to the Moon.
Chuck Wood

PS - I really do like the place where Apollo 17 actually landed - the Taurus-Littrow Valley!
PPS - This is a repeat of a classic LPOD from nearly 5 years ago - Jan 21, 2006. I hope some great
new telescopic images reach me soon so that the Earth view of the Moon returns to LPOD!


Yesterday's LPOD: Where To Land

Tomorrow's LPOD: No Hole At the Pole