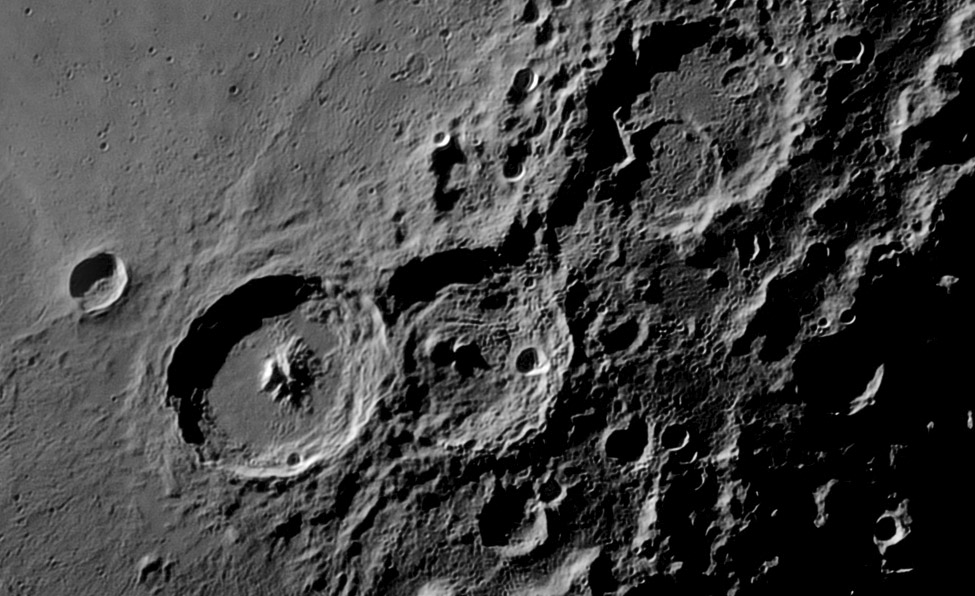 Why is this region such a powerful attraction for observers? Perhaps because it includes the second best placed big crater on the nearside (after the slightly smaller Copernicus). This means that the interior of Theophilus is clearly visible, with its broad flat floor and massive central mountains. Somewhat jumbled terraces occur with a scallop out of the western wall and a triangular slump block (similar to the one in Plato), where the forming rim met less resistance expanding into the interior of Cyrillus. The exterior of Theophilus is better than Copernicus in showing melt ponds - see them in front of the crater? The second reason this area is attractive is the before and after and after appearance of Theophilus, Cyrilus and Catharina (top right). These three craters are all about 100 km in diameter and illustrate stages in degradation. For Cyrillus the aging may have been instantaneous when Theophilus was formed. Catharina has been modified by the large crater within it, and infilled somewhat by material that probably includes ejecta from the Imbrium Basin. Maybe there are additional reasons for this being a favorite area - a mare-floored basin cutting into the highlands? What do you think?