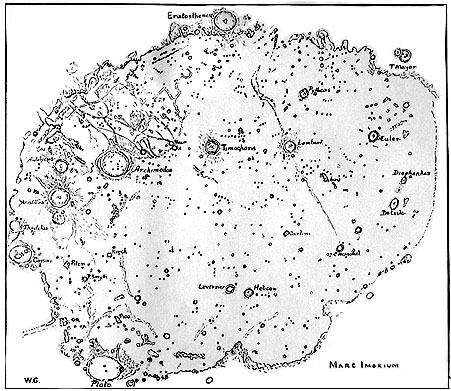 Goodacre's red volume The Moon is my favorite observer's guide to the Moon. The main reason is the 25 maps and assorted charts which are clear and uncluttered. Elger's 1895 The Moon also had wonderfully clear maps, but his Moon was shown in just four quadrant maps so little detail was depicted. And the 1955 The Moon (there has been little imagination in titling lunar books!) by Wilkins and Moore had so many details stuffed into each map that they were nearly illegible and hence useless. Goodacre included charts like this one for each of the major maria, and I like its conciseness. You can easily handle a map like this at the telescope and identify all the named craters. Goodacre wrote that he added to this map 700 small pits seen on the famous Mt. Wilson photo of the Imbrium region, but I didn't count them.

Tomorrow's LPOD: The Case of the Missing Rille