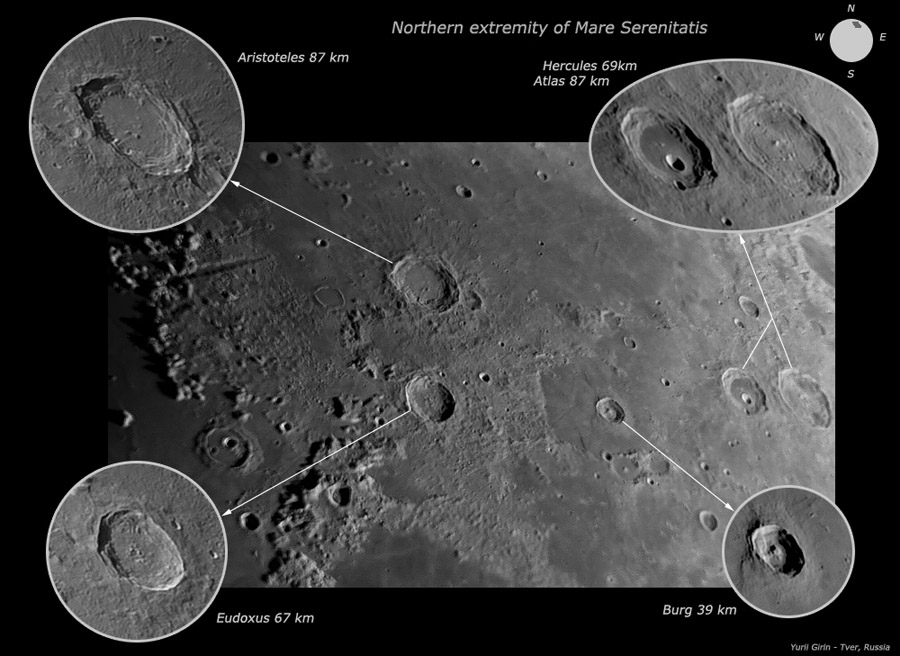 As soon as I saw Yuril's composite image I immediately thought of beautiful mapsfrom a hundred years ago that often highlighted important features in the corners. This image is near the edges of Imbrium, Serentitatis and Frigoris and is full of fascinating features. The straight-sided Lacus Mortis, a crater with a lake's name, is the largest object, with fractures and a fault extending inward from its edges, and Bürg, a standard complex crater, replacing any peak that might have previously existed at its center. To the northeast are fraternal twins, not identical. In fact, one is older than the other so it might be better to call them brothers or even distant cousins. Near the center of the image are two other craters always observed together, Eudoxus and Aristoteles. Both are large and relatively fresh but have smaller central peaks than expected. Is that related somehow to their formation on fragmental basin ejecta, that might have not been strong enough to rebound as a coherent mass? The image doesn't have enough corners for all the interesting landforms it contains: two-eyed Cassini, the Alpine Valley dagger, and the odd amphitheater of Alexander - surely one of the world's greatest generals deserves a better lunar memorial, although his empire did disintegrate rather quickly.