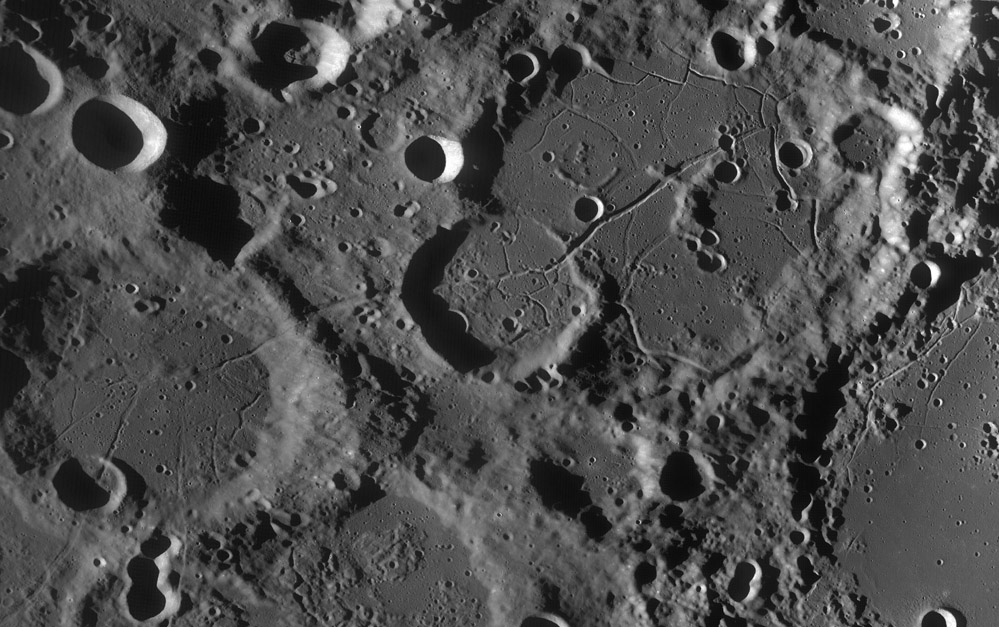 Scientists think they understand lunar rilles, but Repsold and environs present challenges. Looking first just at Repsold (upper right) there seem to be two rille families. First, are the roughly concentric and radial ones that follow a familiar pattern (think Pitatus). These look like the top of a loaf of baked bread, with cracks due to doming. These rilles clearly relate to the smooth fill - Orientale ejecta - that fills the crater floor. Cutting across the middle is a larger and deeper rille, the Repsold Rille, that passes through the rim of the later crater Repsold G (center of image), and just keeps going across its floor, over its opposite rim, and through a short stretch of highlands and down into Galvani (bottom left). From the central peak of Galvani, a similar rille - or the same one interrupted - passes across Galvani's floor, climbs up a crater on its rim and then continues across the countryside. The Repsold Rille and this one (if they aren't just one) don't pay any attention to the landscape and can't be related just to material ponded in these craters. So you look for a regional control to help explain their existence. That will be easier to do when we have full global maps of WAC mosaics, but right now it doesn't look like the Repsold Rille is radial to anything so we can't guess at the forces that caused it to form. It is almost like a ray that splashed down across innocent terrain.