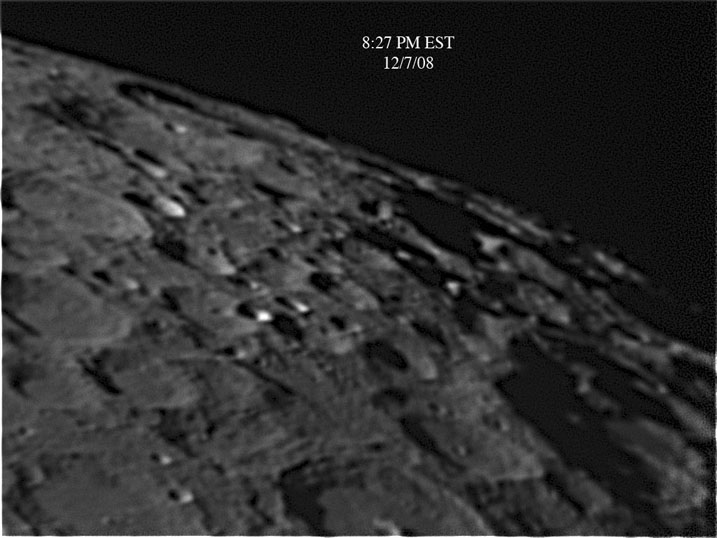 On November 14th, Indian scientists purposely crashed a small probe into a crater near the Moon's south pole. This coming year, as part of the LRO/LCROSS mission, US scientists hope to create a bigger splash with the controlled impact of the 2200 kg upper stage of a Centaur booster rocket into another south polar crater. Laboratory experiments suggest such a crash will produce a thin funnel-shaped shell of rarefied dust rising to perhaps as much as 30 km and spreading outward from the impact site over a few 10s of seconds (with most of the dust draining from the funnel in a matter of a minute or two). Professional astronomers on Earth will try to catch a glimpse of the sunlit edges of this tenuous "ejecta curtain" and possibly (if the lunar soil contains traces of water) of a larger cloud of sublimating/ionizing water ice. The coordinates of the impact point will probably be known in advance to an accuracy of 2 km or less; but, in a rare example of outreach to the amateur community LCROSS scientists have solicited amateur observations to assist in their Earth-based training exercises: it turns out modern professional astronomers have little experience with what the Moon looks like from Earth, so they are hoping amateur photos will help to establish landmarks that can be used to insure that when the impact comes they can point their giant telescopes at the correct location with arc-second accuracy. During the December training exercise, New Jersey-based amateur Clif Ashcraft was able (under difficult conditions) to snap several photos of the Moon's appearance -- and post them to the pro-am website -- several hours before the Sun set at the professional observing location in Hawaii. Hopefully Clif's photos gave scientists there confidence that they were pointing their telescope correctly.

Technical Details
December 8, 2008 at 01:27 UT. Taken under conditions of high wind and poor seeing. See Clif's report for further details. The location of Faustini (the target crater for the exercise) was labeled on this version.