More Than a 3 Ring Circus 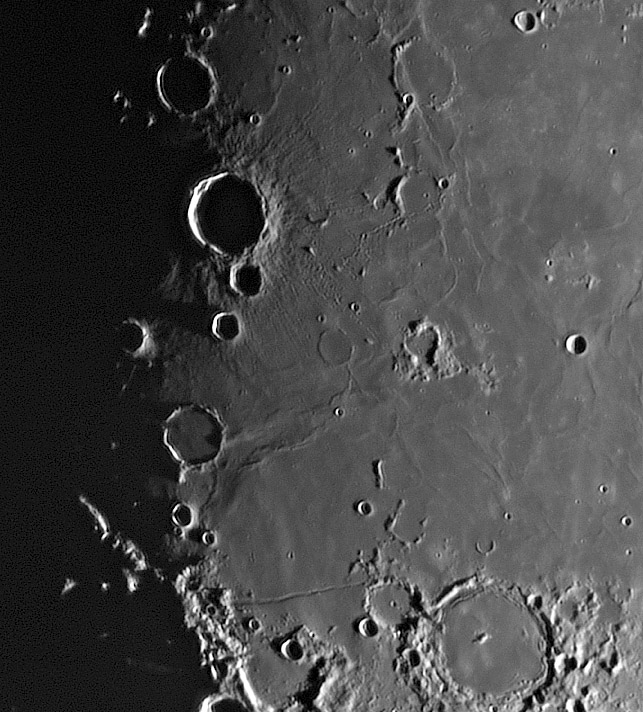 East of Bullialdus is a line of lava covered craters very similar to the ghostly features in Mare Tranquillitatis that I call the Lamont-Gardner Megadome Alignment (LGMA). This Opelt, Gould, Wolff Alignment (OGWA) extends about 300 km roughly north to south, and arguably could be continued another 250 km, ending at Hesiodus. As with the LGMA one could question if these were individual random impacts - like La Caille, Blanchinus, Werner and Aliacensis - that somehow were preserved while others were destroyed. There is no compelling evidence for an alternative hypothesis of calderas along a fracture zone. Perhaps these craters formed along a ridge that was somewhat higher than terrain to east and west and thus were not completely buried by thicker deposits of Nubium lavas. The idea that they could be basin secondaries from Imbrium is unlikely for they are much larger than known secondaries at comparable distance. Another unusual feature to speculate about is the relatively smooth patch of mare between Hesiodus and Kies. This area differs from nearby maria in not being criss-crossed by small ridges. Is it the location of a small, deep basin filled with enough lavas so that old impact craters are buried, and having interrupted the Nubium stress field resulting in no mare ridges? Pure speculation - maybe even bogus.