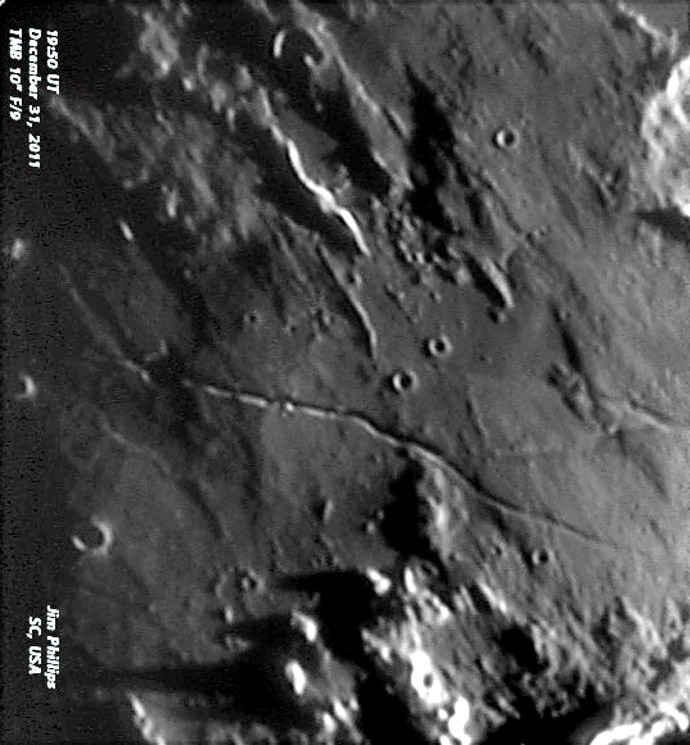 Early, EARLY sunrise on Hygenius. That is how Jim described this image but it almost seems like pre-sunrise. At such low Sun angles gentle swells and other delicate features become visible that are often not noticed. There is a large swell immediately east (to the right) of Hyginus, and Jim's image suggests that the low area east of that is due to a perfectly circular crater (about the size of the swell) that has been nearly inundated by Imbrium ejecta. I don't recall seeing that before. At the bottom right edge is a low elevated area of ejecta with telltail Imbrian-radial striations. The top edge of this deposit is cut by the diagonal rille that connects the Ariadaeus and Hyginus rilles. But here we see that the Ariadeaus Rille actually continues to the northwest under the Imbrium ejecta. This is hinted at in other images but this may be the best view proving its existence. There may be also some vertical offselt along this extension for to the north of it is mare lava, causing an abrupt albedo boundary. I really love the 100 m resolution of LRO WAC images, but until they have a mosaic showing every area until near grazing lighting there will be room for backyard imagers to continue to reveal subtle landforms depicting earlier episodes of lunar history.

Chuck Wood
Note - this is the first LPOD that I've done on my iPad. Only half way easy because of a new keyboard for it.