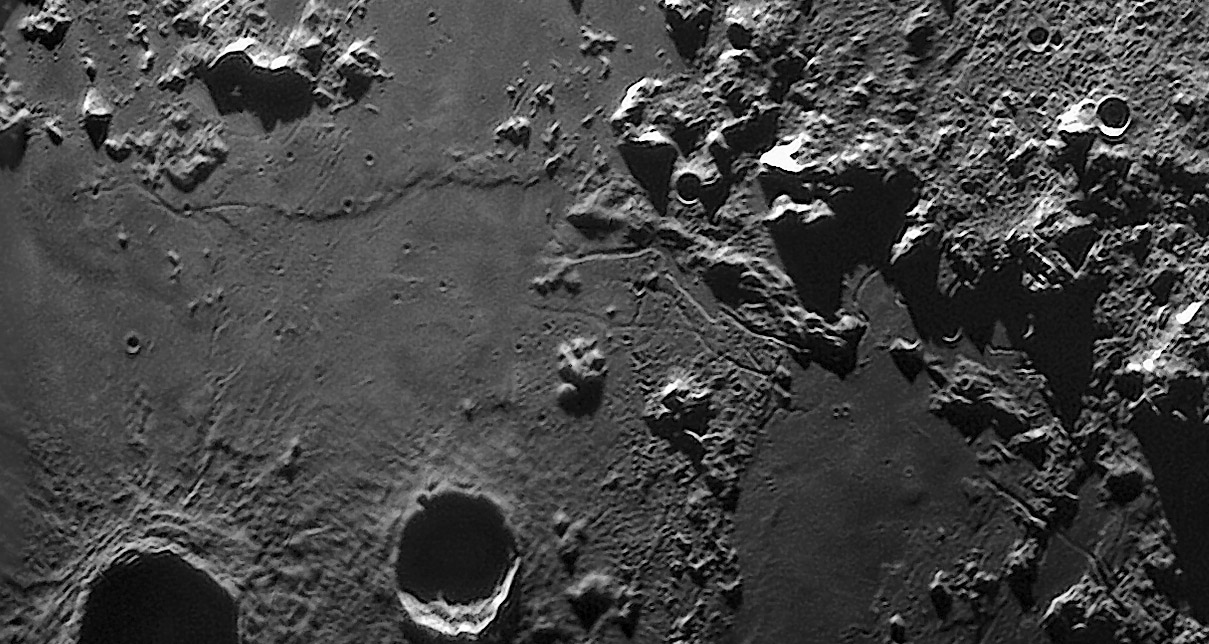 Yesterday's LPOD of the Fresnel RIlles harkened back to an earlier period of lunar studies when drawings were the best method of recording details. In Phil's text he compared his observation with drawings from 60 to 80 years ago. Historically, it is always interesting to understand what our predecessors saw, but George's image today demonstrates that we can use more modern information to come closer to the truth. Phil asked two questions: Does the main rille continue northwards (to the left) and do any of the Fresnel Rilles connect with the Hadley Rille? Fortunately we don't have to depend on what the ancients wrote or on any single person's drawings for there are hundreds of imagers of the Moon and millions of spacecraft photos. The LRO WAC mosaic excerpt that John Moore posted in yesterday's comments demonstrates that the Hadley Rille does link to one of the minor Fresnel rilles. But you don't have to launch a hundred's of million dollar spacecraft to document that - George's image strongly suggests it, as well as showing a classic dome that I was unaware of. And at the north of the main Fresnel Rille there is a hint of an indentation that may represent where the rille was nearly completely covered by later lava. Both the northern and the southern edges of the block that contains the Fresnel Rilles are straight, suggesting that they are fault boundaries. The textured terrain between the faults is thought to be old material that wasn't down-faulted and thus is still visible. It is intriguing that on the north side, the Fresnel Rille was apparently hidden by lavas that filled that lowered area, but on the south, the Hadley Rille, which is the youngest part of the lavas there does connect to one of the Fresnel Rilles. Are the Hadley Rille lavas older than those to the north of the Fresnel Rilles? New views can open up new questions at a deeper level of understanding.