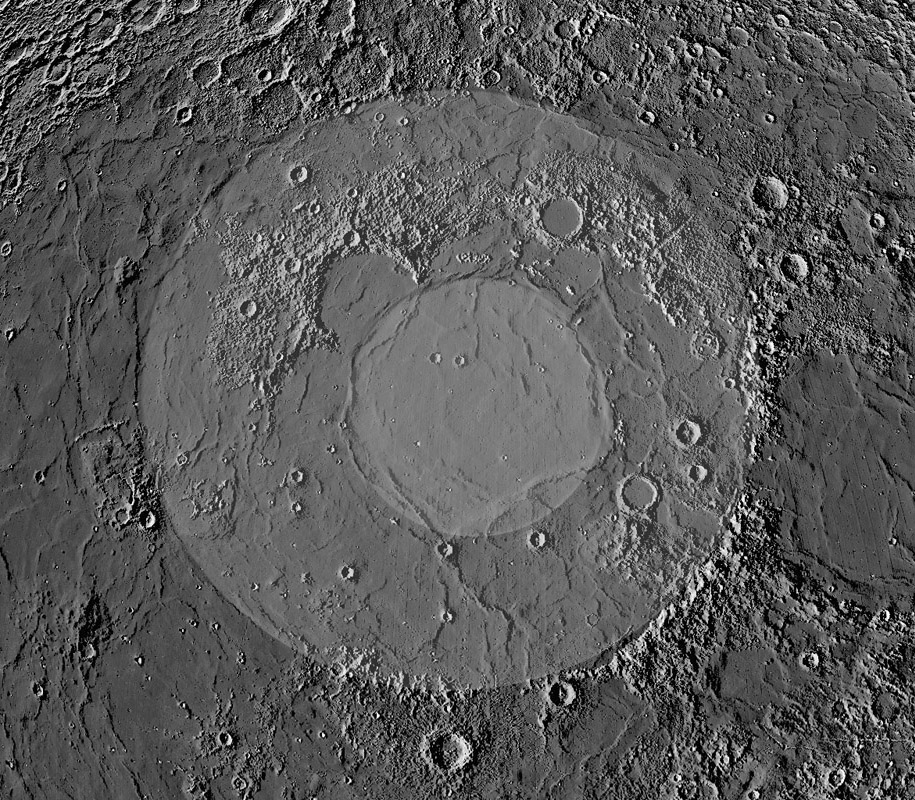 This may be the wildest LPOD ever. It proposes that the standard understanding of the shape and size of the Imbrium Basin is wrong. In 1988, Paul Spudis and colleagues defined the main rim of Imbrium as following the Apennines and Carpathian mountains in the east and south, and in the north following the front of the Alps, cutting through Plato, and continuing along the north side of the Jura. To the west the evidence is more sparse but the rim was drawn to pass through isolated peaks. But when I looked at this synthetic image that Maurice constructed from LRO topo data with a half degree Sun angle everywhere I was bothered by the fact that the inner ring of mare ridges was so eccentric, being very close to the Iridum edge of the main rim, and far from the Carpathians. And then I noticed that mare ridges naturally extended the curvature of the Carpathians all the way to the east side of the Aristarchus Plateau and around to the north side of Mare Frigoris, with ridges between Plato and Archytas carrying the rim back toward the Caucasus. This main basin is indicated by the gray circle I superposed on Maurice's Imbrium-centered image. The inner ring (marked by the lighter gray circle) is still eccentric from the proposed ring, but not nearly as much as in the Spudis model. If this mare-ridge rim model is correct, what in the world is the mountainous and hilly region from the Alps thru Plato, Sinus Iridum and the Gruithuisen area (terrae Grandinis and Pruinae of Riccioli) doing inside the basin? One possibility is that it is analogous to the Archimedes Bench, the hilly terrain near Archimedes. Another possibility, first suggested by Jim Whitford-Stark and Fryer 35 years ago, is that the Caucasus, Grandinis and Pruinae is a mega terrace that slid inward when the basin formed. This is enough wild speculation for now, but it builds on similar previous observations by USGS mappers Wilhelms and McCauley who suggested that Imbrium's main rim passed along the north shore of Frigoris. This is the first interpretation to benefit from a homogenous depiction of all relevant mare ridges, and it is based on amateur work!