The Bottom of the World, Upside Down 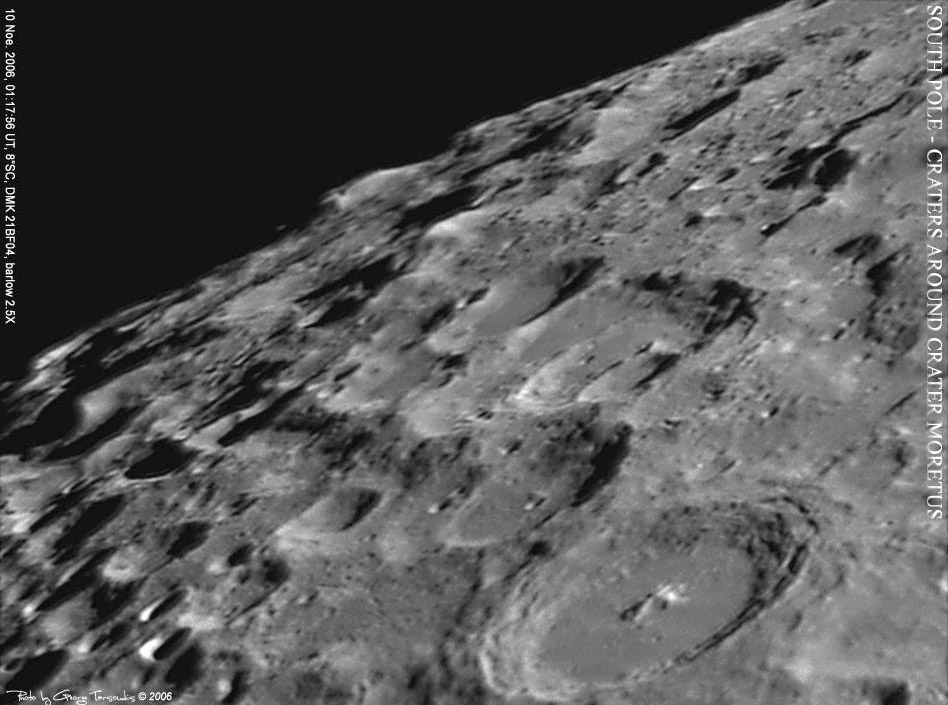 The tallest mountains on the Moon, based on measurements more than 140 years old, stick up above the limb near the lunar south pole. LPOD has recently investigated these Leibnitz Mountains from the overhead perspective provided by radar imaging, but it is delightful to visually observe them, or failing that, to examine a great LPOD image such as George’s. You can crater hop to the pole by starting with Moretus, the 114 km diameter Tycho look-alike crater in the foreground. Immediately behind that is Short with its pipsqueek peak and random impact crater; poleward are the overlapping trio of Newton D, Newton itself, and Newton G. Just touching G is Newton A with a small fresh crater on its southern rim. An imaginary line from the center of Moretus to the small fresh crater continues on and hits the massive peak with the bright upper slope. This massive peak was designated M1 by Ewen Whitaker back in 1954 when he sketched the extreme south polar limb. To the right of M1 but not on the limb is M3 which in fact looks more imposing when it is on the limb. The massive elongated mountain (with a small bright crater on its left side) beyond M1 on the limb is Ewen’s M5 at 87°N, 40°W. If this identification of M5 is correct then the bump on the llimb to the right is M4. These massive peaks are all thought to be rim segments of the huge farside South Pole-Aitken (SPA) basin. But I have never understood why the outer basin rim is isolated peaks rather than a continuous mountain chain such as one of SPA’s inner rims.

Technical Details:
10 November 2006. Details on image. South is up because the image is easier to read