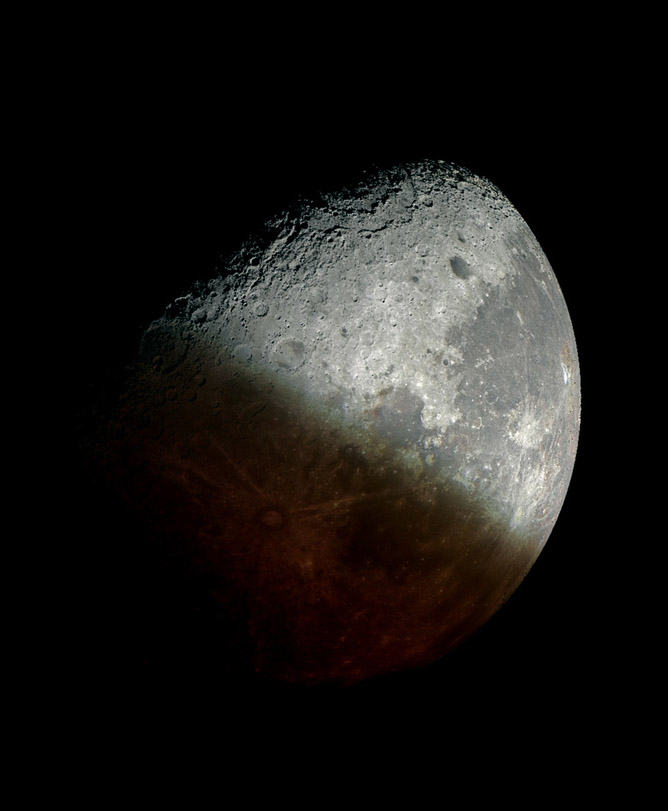 I created this image of the 21st December 2010 eclipse using LTVT and LOLA 64 DEM for the modelling and terrain, and two of my own photos for the texture. One photo was during the eclipse to capture the shadowed part (with a Canon EOS 550D and 200mm f/2.8L lens) and the other was taken after the eclipse (with a 550D and 12" Sky Watcher Dobsonian), to provide the surface detail. Some colouration of the Moon's lit portion is from increasing the saturation of the full Moon photo. The resulting image is a view of the Moon during that eclipse, from space.

Note from Chuck Wood
A number of folks have been using the LRO digital elevation model data and Jim Mosher's LTVT software to visualize the Moon at specific times to recreate specific observing conditions. Tom has taken this a step further, adding his own observations, to show what a lunar eclipse would look like from polar orbit. I like this pie-shaped image because it gives us another way to look at the Moon. BTW, do you see the Cassini's Bright Spot?